Book 6 in the Buckhorn Brothers Series 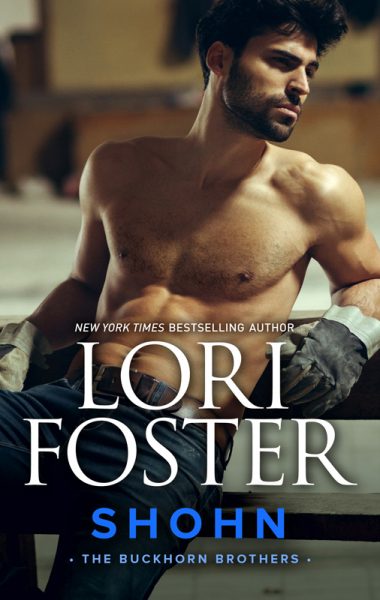 Book 6 in the Buckhorn Brothers Series

The story of Shohn Hudson & Nadine Moest. The last thing Nadine wants is to be the latest notch on gorgeous ranger Shohn’s bedpost. But Shohn is determined to win her trust-and her heart.

Shohn is Casey’s younger brother, son to Sawyer and Honey. This story also includes appearances from other relatives.

Shohn is one of Lori’s benefit books—all advance & royalties (and any direct-from-Lori sales) go to the local, no-kill animal shelter, the Animal Adoption Foundation.

is Book 6 in the Buckhorn Brothers Series 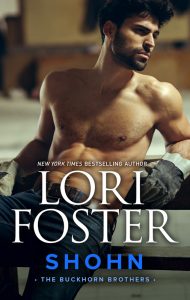 Even at seven P.M., the summer sun hung in the sky, a giant red ball of heat scorching the earth, ramping up his frustration, and stealing the remainder of his energy. Sweat glued the back of Shohn Hudson’s uniform shirt to his spine and plastered his hair to his head. After the long day of chaos, he wanted to grab a cool dip in the lake, bum dinner off his folks, and then head home to sleep in blessed air conditioning.

The day had been so hellish, he didn’t even want female company, had in fact turned down a few sexy campers. The ladies hadn’t been shy when asking him to stick around and “share their camp fire” with them.

But with other obligations still waiting, not to mention the restrictions of being a ranger, he’d declined, and then lectured them on fire safety.

And now, instead of heading to the lake, he drove to the Animal House Pet Hotel to pick up Amber’s dog for her. His cousin had lousy timing for a favor, not that she’d realize it was lousy timing. And he did owe her. Amber had saved his ass many times by running interference for him, helping him to shake off the ladies who refused to take a hint.

Pulling into the gravel lot, Shohn admired yet again the set-up that housed upwards of thirty dogs at a time. He and his family were all animal lovers, and they appreciated the upscale, friendly, caring atmosphere of the place. Anyone in Buckhorn County who needed to board a pet came to the Animal House for top of the line care. From tall shade trees to a grassy field, an obstacle course to a big doggy pool, an exercise track to a play area, Nadine Moest gave dogs the best of everything.

Unfortunately, as far as the females in Buckhorn County went, Nadine was the least interesting on his “maybe someday” list. Never mind that she had a banging body, or that she’d factored into his hottest adolescent fantasies; he and Nadine were friends, nothing more, so most of the time, she didn’t even make that list.

Most of the time.

Speak of the devil…

As Shohn put the jeep in park, Nadine came around to the front of the building walking three big dogs, two leashes in one hand, one in the other. She had her long brown hair in a sloppy top-of-her-head bun that threatened to topple at any second. Snug shorts showed off her plump thighs and a spectacularly rounded ass as she directed the big dogs. Nadine Moest was not a skin-and-bones kind of girl.

Her loose T-shirt couldn’t hide her generous rack, especially with the words “I Heart Wet Kisses” drawing his attention. Her shirt was as sweaty as his, a little dusty, and had a picture of a dog to go along with the text.

When they spotted him, the dogs began to bark in glee, straining against their leashes. Dark glasses hid Nadine’s eyes, but Shohn could tell that she frowned as she approached his car.

As she reached him, she shoved the oversized sunglasses to the top of her head. “Hey Shohn. What are you doing here?”

No smile, no happiness at seeing him. That was one of the things about Nadine that he liked least of all – her complete and utter indifference to him. Most women, young and old, greeted him with enthusiasm.

He rested one arm over the open window frame, the other over the steering wheel. “Picking up Amber’s dog for her.”

The dogs pulled Nadine this way and that, making her boobs jiggle, and since she was right there outside his driver’s side window, well, how was he not suppose to make note of it?

“Amber didn’t say anything to me about you picking up Rookie.”

“Must’ve slipped her mind.” No way was she wearing a bra. Things were moving too easily under there to have any type of restraint –

“Sorry,” she said in a voice gone high. “You can’t have him unless Amber specifically tells me to give him to you.”

“The hell you say.” Hearing the conviction in her tone, Shohn put his ranger hat on the seat, rolled down the remaining windows to let in any scarce breeze that might decide to stir up, and opened the door of his jeep, forcing Nadine to back up. The dogs went berserk with happiness, barking and jumping and nearly taking her off her feet.

He relieved her of a leash – sort of against her wishes.

“Nadine.” He smiled, but it had no discernible effect on her. Difficult girl. “Relax,” he told her. “Dogs like me.”

She eyed his utility belt with the Glock, the mace, the spare ammo. “Only trained staff is supposed to handle the dogs.”

“I know what I’m doing.” He knelt down to talk to the husky. “You giving her a hard time, boy?”

“Girl,” Nadine corrected. And then, under her breath, “And here they call you an expert.”

“Hadn’t gotten the back view yet, Nadine.” He rubbed the dog’s head and straightened again. “An expert what?”

She went still, her face flushed, and she frowned some more. “Nothing. Never mind.” She turned and started in. “I’ll call Amber to see if she gives permission.”

Shohn watched the jiggling of her rounded rump in the snug shorts until the husky gave an impatient jerk of the leash. Following along, he asked, “You think I’d lie about it?”

“I think I have liability to consider.” She held the door open for him.

Two steps up the porch and he heard the din of a dozen dogs playing. “You’ve known my family forever, Nadine.” Deliberately, he sidled in close to her, his chest brushing her… chin. At five-four, she was so much shorter than his six-one that he’d have to bend down to rub against her breasts –

“Your family is terrific,” she said in that slightly shrill voice again. “Lovely even.” She let the door drop on him and hurried along.

Meaning his family was lovely, but he wasn’t? Not that he wanted to be lovely, for crying out loud. “I don’t lie. If I tell you that Amber sent me, then she –”

“I’ll give her a call to confirm it.” Nadine led the dogs down a hallway and into a penned area at the rear of the house.

Shohn surveyed the room. It was spacious with dog toys everywhere, watering stations, stacked beds, and various play stations. Even with so many dogs inside, it looked clean, which had to mean she worked on it nonstop.

“Come on, then,” Nadine grumbled. “She wants to get back in.”

Shohn brought the husky up close and Nadine let her into the pen and then unleashed her. She took off at a run.

An assistant was in the penned area, tossing balls, rubber chew toys and raggedy stuffed animals from a big basket. She was young, slim, cute…

Bristling, Nadine stepped in front of him. “Don’t even think it, Shohn Hudson.”

Leaning away from that venomous tone, Shohn lifted his brows. “Think what?”

“About hitting on my assistant, that’s what.” One hand on his chest, she backed him up two steps. “She’s off limits to you.”

Her gaze dipped down his body again, but it didn’t seem to be his gun that held her attention. “Keep that up and I’ll be packing a different type of heat.”

She shook her head as if to clear it. “I mean it, mister. I like Roxi. She’s doing a great job. I do not want you corrupting her.”

What the hell? Shohn planted his feet and refused to back up any farther. So Nadine not only wasn’t interested in him, she also had a very low opinion of him. It didn’t make any sense. As a general rule, women liked him. “How the hell would I corrupt her?”

Her flattened hand turned into a pointing finger that poked, poked, poked with her every word. “The last girl you played with started calling in sick, leaving early, and instead of working when she was here, she was forever checking her text messages, hoping you had contacted her.”

Shohn caught her finger and held on.

She pulled, and when he didn’t release her, she beetled her brows over her big brown eyes. “You hadn’t.”

With her looking at him like that, he had a hard time keeping up. “Hadn’t what?”

“Called her,” she said with exasperation, and again tried to free her pointy finger.

It took some thought before Shohn recalled the girl she meant, and then he was the one scowling. “I’d had one date with her and she turned into a damned stalker.”

“Oh, poor you. How tragic that a woman wanted a second date.”

Worse and worse. “I have second dates.”

Actually, he’d had fourth and fifth dates, but he never got serious about anyone because he liked his life too much to want it to change. With Nadine so unaccountably hostile, he didn’t bother trying to explain any of that to her. “So I’m not allowed to notice when you hire new people?”

“Sure you can.” She gave a final, more furious yank and freed her hand, which she then tucked behind her back, out of his reach. “I hired Fred weeks ago. He helps keep up the grounds. Go around back and you can visit with him all you want while I try to get hold of your cousin.”

He didn’t want to visit with Fred, damn it, and he didn’t want Nadine to brush him off. He preferred to stick around and maybe… win her over.

Why, he didn’t know, since she wasn’t very high on his list. But it could have something to do with the heated scent of her sun-warmed body and all those ripe curves. He had the overwhelming urge to nuzzle the soft skin of her neck, her breasts… those lush thighs.

“Shohn,” she warned in a shaky voice.

Right now, with her hand behind her like that, her breasts were sort of jutting toward him –

With a low growl, Nadine turned and flounced away. 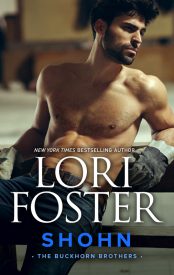 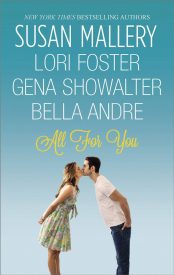 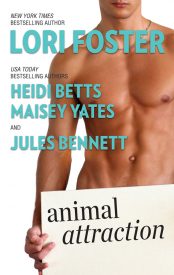