Book 11 in the Buckhorn Brothers Series

Book 11 in the Buckhorn Brothers Series

It’ll take a wild storm for the princess of Buckhorn, Kentucky, to catch the new sheriff’s eye … and heart.

Kady Kaspar’s sights have been set on Tucker Turley for far too long—and she’s tired of waiting for Buckhorn’s handsome sheriff to notice her. When a heavy storm brings them together, it’s about time to test the waters and see if the intense attraction she feels goes both ways. Because if it does, he’s about to learn how stubborn she can be…

Of all the things Tucker expected to deal with when the rain started to pour, a litter of stranded puppies and spitfire Kady, who’s determined to seduce him, sure didn’t make the list. Yet there he is, bachelor pad overflowing with furballs and Kady in his bedroom. He’s wanted her for years, but given her family’s prestige, he needs to know that she’s serious before he makes any further moves … but will his caution cost him everything?

Tucker is Lori’s 2018 Reader Author Get Together benefit book. All author and agent proceeds from the book will go to the Animal Adoption Foundation.

is Book 11 in the Buckhorn Brothers Series 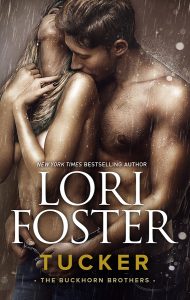 Tucker put his shoulder to the muddy gate of the ancient truck and shoved hard. At the same time, the farmer hit the gas. The tires spun, spraying mud over his legs and lap, splattering up his chest and even into his face.

He could think of a hundred ways he’d rather spend his evening. Sex would top the list, but then he’d been so long without, it was no wonder that particular activity seemed glued to the forefront of his brain.

He knew why it had been so long, but hopefully no one else suspected.

Finally, finally, the truck rocked free and gained traction. It lumbered awkwardly back onto the road.

Turning his face up to the pounding storm, Tucker let it wash away some of the mess. The turbulent weather was more intense – and dangerous – than usual for the area. He had a feeling it would cause more problems before it blew over.

There were times when being the sheriff of a small town was a major pain in his ass.

When the driver’s door of the truck opened, Tucker quickly stepped forward. “No, don’t get out, Harmon. No reason for us both to be soaked.

Harmon, who was at least eighty-five, frail of body but sharp of mind, gazed at him with gratitude. “Thank ye, sheriff. I’da been stuck there all night if it weren’t for you.”

Meaning it, Tucker said, “I’m glad I came by when I did. Now get home safe, okay? The storms don’t seem to be letting up anytime soon.”

Nodding, Harmon replied, “You too.” He pulled his door shut with a clatter and slowly, oh-so-slowly, drove away.

Tucker headed for his SUV, wondering if he should strip before getting in so he didn’t get mud on the seats. The town supplied the car for both official and personal use, and he kept it shining out of respect for the office. Luckily he’d been off duty when he spotted Harmon, so at least he hadn’t ruined his uniform.

His shirt, jeans, boots and socks – hell, probably even his underwear – were muddy.

He was debating how much he’d have to take off to protect the car’s interior when headlights came around the corner. It took him a second to recognize the local news van.

Just what he didn’t need. Temptation.

Groaning, he crossed his arms and stood in the headlights of his SUV, just off the edge of the road.

The van slowed, rolling to a stop next to him, and none other than Kady Kasper herself rolled down the driver-side window. Though it looked as if she’d made an attempt to dry off, rain still plastered her pale blond hair to her head and smudged her makeup.

Her sunny smile belied her bedraggled state, which was no doubt thanks to the miserable weather. “Tucker, what are you doing standing around in the rain?”

Incredulous, he peered into the front of the van but didn’t see Cleets, her videographer. He looked toward the back interior and saw only equipment.

Un-freaking-believable. Keeping his tone level, he asked, “Are you out alone?”

One slender brow rose as her pale blue eyes widened. “Did I miss a curfew, sheriff?”

Her whisky-smooth voice made his hackles rise. Only Kady. No one else got under his skin like she did. No one else turned him inside out. Hell, he was known for his calm manner.

Around her, he had to constantly fight for control.

He gave himself a few seconds, then replied evenly, “It’s nearing midnight.” Surely she shouldn’t be out and about alone.

Humor lifted the corners of her soft pink lips. “It’s ten-thirty, actually.” She tipped her head. “Past your bedtime?”

This woman, this one small female, had proven to be the bane of his existence. At twenty-five, she was six years younger than him. A walking temptation, a natural flirt, and the most beautiful thing he’d ever laid eyes on.

How could he want any other woman when Kady Kasper existed?

Except … he didn’t dare.

For one thing, she was related to the most prominent, respected family in the area. Her father and three uncles were pillars of the community, known to everyone, respected by all. Anything that happened in or around Buckhorn, Kentucky, the brothers knew about it, probably had a hand in it, or had orchestrated it themselves. They claimed ownership of the area and the residents, and felt responsible for them all.

Kady was Gabe Kasper’s oldest daughter. Though the youngest of the infamous Buckhorn brothers had been a dedicated husband and father for longer than Tucker had known him, rumor had it he’d been a real player in his youth. Clearly, karma was a bitch because his daughters were not only knock-outs in the looks department, but also grade-A flirts.

Hitting on Kady would mean drawing scrutiny from that powerful family – and there were a hell of a lot of them, starting with the four brothers and their wives, then the numerous siblings, cousins and in-laws.

But he liked her family. That wouldn’t hold him back if it wasn’t for the second thing: Kady teased every man, young and old, who came within shouting distance. Flirting seemed a natural part of her persona. Even the way she commented on the damned weather had every man with a heartbeat thinking in innuendos.

When it came from her, it all sounded sexual. Add in the way she looked at a man, every man, and it made it near impossible to know if her coy gazes and sly smiles actually meant anything.

Hell, she was doing it now, staring at him with her thick lashes shadowing her eyes, a slight curl to her soft lips.

Tucker decided, not for the first time, that it was safer to stick to business. For added effect, he put on his best expression of authority. “We’re in the middle of a storm and it’s dark as Hades out here.”

“A storm?” she said with surprise, peering up at the sky as if she hadn’t known. “Why, I believe you’re right.”

Ignoring her saccharine sarcasm, he swiped rain and mud from his face and asked, “Was there a reason you’re out and about, Kady?”

Oh, that deference was its own sort of come on; he’d love playing cop to her damsel in distress … and thinking that was dangerous. He gave her a stern frown.

She sighed. “You’re no fun at all.” Taking pity on him, she pulled around in front of his SUV, put the vehicle in park and turned it off. He walked to the driver’s window, ready to ask what she thought she was doing, but she turned away out of her seat and beckoned him with a finger. “Come around back.”

Said the spider to the fly…

Though the rain was cold, it was a smothering hot night and he could almost feel the steam rising from his shoulders and the back of his neck.

With or without the storm, that was a typical effect when he was around Kady.

He hesitated, but he wasn’t a coward, so he trudged through the puddles accumulating on the road and walked around the van.

Kady opened the doors. “Come on up here.”

He eyed her skeptically. With all the equipment, there wasn’t a lot of room left in the cargo area of the van. She’d laid out an already-muddy towel on the floor, but held another clean one in her hands.

Almost as if she expected to dry him herself.

His skin prickled at the thought and he swallowed heavily.

Voice softer now, she promised, “I don’t bite, you know.”

Damn it, now she was taunting him? Not tonight.

Mouth tight, he reached for a handhold and pulled himself up next to her. “I never said-”

“Not unless you ask me to.”

His gaze clashed with hers and she actually smiled.

Oh God, he envisioned that soft mouth open on his shoulder, the wet touch of her tongue, the sharp edge of her teeth grazing his burning skin…

As if she knew the image she’d planted in his brain, her cheeks flushed and she leaned a little closer.

Her scent was that of damp skin and body heat and smoldering sex appeal. He continued to stare, all but mesmerized—an unfortunate reaction to being this close to her—until she finally lowered her lashes, freeing him.

The second she did, he sucked in a deep, necessary breath and tried to regain his famed cool demeanor. 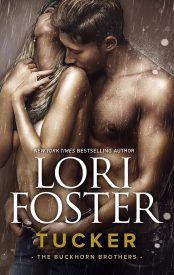