Book 3 in the Buckhorn Brothers Series 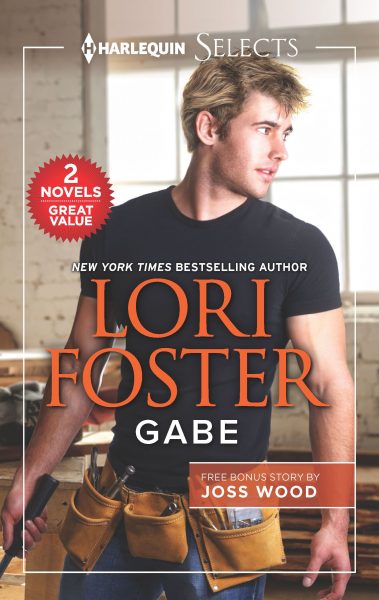 Book 3 in the Buckhorn Brothers Series

A bundle featuring Lori’s novel, Gabe, and Taking the Boss to Bed, a special bonus story by Joss Wood.

Everyone loves a hero, especially when he’s also a Buckhorn brother!

Gabe Kasper, the heartthrob of Buckhorn County, Kentucky, can have any woman he wants. But it’s prickly, uptight Elizabeth Parks who gets under his skin. She thinks Gabe’s some kind of hero and wants an interview for her thesis. He doesn’t consider pulling a couple of kids out of the lake heroic, but he’ll answer her questions in exchange for kisses…and more.

Elizabeth’s unwavering in her mission to dig deep into a hero’s psychology, and Gabe’s the perfect specimen to study. But the price of getting the answers she needs might be her heart…

is Book 3 in the Buckhorn Brothers Series 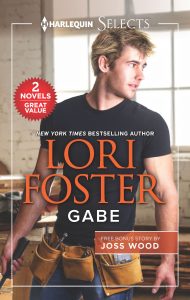 “Isn’t he just the absolute sexiest thing you’ve ever seen?”

“Hmm. And thank heavens for this heat wave. I love it when he leaves his shirt off.” A wistful, feminine sigh. “I swear, I could sit here all day and look at him.”

“We have been sitting here all day looking at him.”

Gave Kasper, pretending to be asleep, had to struggle with a small smile. Life was good. Here he was, sprawled in the warm sun, letting the waves from the weekend boaters gently rock the dock with a fishing pole loosely held in one hand, a Van Halen hat pulled low over his eyes and a gaggle of good-lookin’ women ogling him. He had not a care in the world. Man couldn’t ask for much more satisfaction out of living.

“He is so gorgeous.”

“And wicked lookin’. I dearly love those whiskers on his chin.”

Aha. And here his brother Jordan had sworn the whiskers looked disreputable and tried to convince him to shave. Jordan could be such a stuffed shirt sometimes.

“I like that golden hair on his body, myself.”

Gabe almost chuckled out loud. He couldn’t wait to tell his brothers about this. Now that the two eldest were marred, and off-limits, Gabe and Jordan, the only two single ones left, got even more attention. Not that he was complaining. Female adoration was one of those things that couldn’t really go to excess, at least in his opinion.

“I don’t mind tellin’ you, Rosemary, it made me nervous when the first two brothers got married off. I cried for two days, and I was so afraid they’d all end up doing it. Heck, besides dying to have one of them to myself, those brothers were the biggest tourist draw we had here in Buckhorn.”

Gabe bit the side of his lip. He’d just keep that little tidbit to himself when he did the retelling. Hell, his brothers’ egos -Morgan’s especially-were big enough as it is. No need adding to them. No, he’d just stick to sharing the compliments about himself.

“And Gabe is the biggest draw my dock has. With him sitting there, no one wants to get their gas or bait anywhere else. I keep thinkin’ I ought to pay him or something.”

“Ha! You’re just hoping to get a little closer to him.”

“No, I just wanna make sure he doesn’t take his sexy self off to some other dock.”

Giggles erupted after such a heartfelt comment and Gabe sighed. He had no intention of switching loyalties. Hell, Rosemary’s daddy had been letting him hang out on his docks since he was just a grasshopper and had first noticed what a pleasing thing it was to see females in bikinis. This place felt almost like a second home now. And since Rosemary’s daddy had passed away, he felt bound to stick around and help out on occasion. The trick was to keep Rosemary from getting marriage minded, because that was the one route his brothers could travel alone, thank you very much.

“It amazes me that those brothers aren’t full related. They all look different-”

“But they’re all gorgeous, I know. And they’re all so.strong. My daddy used to say it took a hell of a woman to raise boys like that. I just wish they didn’t live so far out on that land. Thinking up a good excuse to visit isn’t easy. Not like accidentally running into the other men here in town.”

Gabe did smile at that, he couldn’t help himself. He and his brothers- he refused to think of them as half brothers- had often joked about going into town to see who was looking for them. Usually some female or another was. But living out a ways, they could always choose when and if they wanted to get friendly. It had been helpful, because once they’d hit their teens, the females had come on in droves. His mother used to claim to keep a broom by the front and back doors to beat the women away . Not that any of them minded overmuch, though his two new sisters-in-law were sure disgruntled over all the downcast female faces since the two weddings had taken place.

Gabe was just about to give up feigning sleep when a new female voice joined the others over by the gas pumps.

“Excuse me, but I was told Gabriel Kasper might be here.” It was more a statement than anything else, and rather.strident to boot.

Female, but not at all local.

Gabe decided to just wait and see what the lady was up to. It wasn’t unusual for someone female to be looking for him, and most everyone in these parts knew that in the summer, you could find him by the lake more often than not. He resisted the urge to peek at the owner of the voice and kept his body utterly relaxed.

“Whatdya want Gabe for?” That suspicious tone was from Rosemary, bless her sweet little heart, and Gabe vowed to take her to dinner real soon.

There was a beat of silence, then, “I have personal business to discuss with him.”

Oh great, Gabe thought. That’ll get the gossip going. What the hell kind of personal business could he have with a woman he didn’t know? And he was certain he didn’t know her. She didn’t sound at all familiar.

“Well, he’s right there but he’s relaxin’, and he won’t thank you none for disturbing him.”

“I appreciate you warning.”

Well used to the soft thud of sneakers or bare feet on the wooden planks of the dock, Gabe almost winced when the clack of hard-soled shoes rang over the water. He ignored it, and ignored the woman he could feel hesitating next to his lawn chair. The breeze stirred and he caught a light feminine scent, not really perfume, but maybe scented shampoo. He breathed deeply, but otherwise remained still.

He heard her clear her throat. “Uh.excuse me?”

She didn’t sound so confident, and he waited, wondering if she’d shake him awake. He felt her hesitate, knew in his gut she was reaching for his naked shoulder.

And the fishing pole nearly leaped out of his hand.

“Son of a bi-” Gabe jolted upright, barely managing to hang on to his expensive rod and reel. His feet hit the dock and he deftly maneuvered the rod, going with the action of the fish. “Damn, it’s a big one!”

Rosemary, Darlene and Ceily all ran over to his side.

Ceily, who usually worked the diner in town, squealed as the fish, a big ugly carp, flipped up out the water. Darlene pressed to his back, peering over his shoulder.

Gabe slid over the side of the dock to the smooth, slick, moss-covered concrete boat ramp, bracing his legs wide to keep his balance while he struggled with the fish. Rosemary, a fisherwoman of long standing, didn’t hesitate to slip in beside him. She held the net at the ready. Just as Gabe got the carp close enough, she scooped him with the net. The fish looked to weigh a good fifteen pounds, and she struggled with it while Gabe tried to reach for the net and hold onto his pole.

But then Rosemary lost her footing and Gabe made a grab for her and they both went down, splashing and cursing and laughing, too. The rod jerked out of his hands and he dove forward to grab is, barely getting a hold and soaking himself thoroughly in the process. The other two women leaped in to help, all of them struggling to keep the fish and the rod while roaring with hilarity.

When the battle was over, Gabe had his fish, and a woman in his lap. Rosemary had settled herself there while Darlene and Ceily hung on him, both struggling to control their raucous laughter. He’d known all three of them since grade school, so it wasn’t the first time they’d played in the water; they felt totally familiar with each other and it showed. A long string of seaweed clung to the top of Gabe’s head, and that started the women giggling again.

Gabe, enjoying himself, unhooked the big fish, kissed it-making the women smack at him-then tossed it back.

It was then they heard the tap, tap, tap of that damned hard-soled shoe,

Turning as one, they all peered at the woman who Gabe only then remembered. He had to shade his eyes against the hot sun to see, and it wasn’t easy with three women draped over his body.

Silhouetted by the sunshine, her long hair looked like ruby fire. And he’d never in his life seen so many freckles on a woman before. She wore a crisp white blouse, a long jean skirt and black pumps with nylons. Nylons in this heat? Gabe blinked. “Can I help you with somethin’ sugar?”

Her lips tightened and her arms crossed over her middle. “I don’t think so. I was looking for Gabriel Kasper.”

“But I was looking for Gabriel, the town hero.”

Ceily added, “The one and only.”

Gabe rolled his eyes. “That’s nonsense and you all know it.”

The women all started in all at once, Ceily, Rosemary and Darlene assuring him he was all that was heroic and wonderful and more.

Little Red merely started in absolute disbelief. “You mean, you are the one who rescued those swimmers?”

Gabe, always the gentleman, boosted each woman to the dock, then deftly hauled himself out. He shook like a mongrel dog, sending lake water flying in cold droplets. The woman quickly backed up two steps.

Rosemary plucked seaweed from his hair and he grinned at her. “Thanks, sweetie. Ah, would you gals mind if I talk to.” He lifted at Red.

“Elizabeth Parks,” she answered stiffly. She clutched a notepad and pencil and had a huge purse-like bag slung over one shoulder, stuffed to over-flowing with papers.

“Yeah, can I have a minute with Ms. Parks?” He had the sneaking suspicion Ms. Parks was another reporter, and he had no intention of chatting with her for more time than it took to say thanks but not thanks. “I won’t be long.”

“All right, Gabe, but you owe us for rescuing your fish.”

“That I do. And I promise to think up some appropriate compensation.”

Giggling again, the women started away, dragging their feet ever step, sashaying their sexy behinds. But then two boats pulled in and he knew that would keep them busy selling gas and bait and whatever other supplies the vacationers wanted. He turned to Red.

Now, without the sun in his eyes, Gabe could see she had about the bluest blue eyes he’d ever seen. They stood out like beacons among all that bright red hair and those abundant freckles. 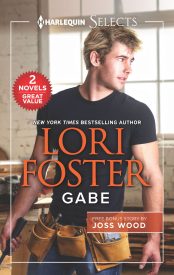 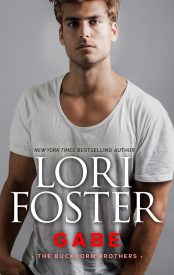 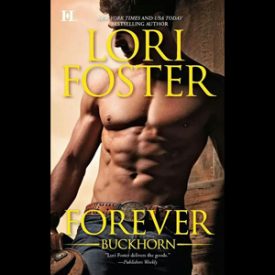 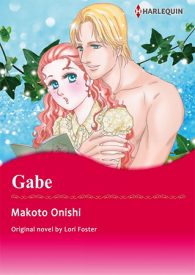