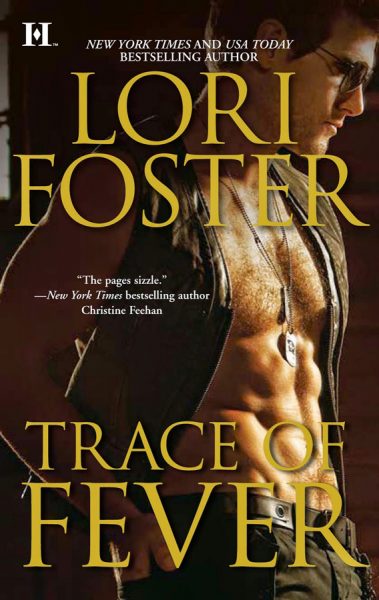 Caught in the crossfire of vengeance and desire…

Undercover mercenary Trace Rivers loves the adrenaline rush of a well-planned mission. First he’ll earn the trust of corrupt businessman Murray Coburn, then gather the proof he needs to shut down the man’s dirty smuggling operation. It’s a perfect scheme—until Coburn’s long-lost daughter saunters in with her own deadly plan for revenge.

With a smile like an angel and fire in her eyes, Priscilla Patterson isn’t who she seems to be. But neither is the gorgeous bodyguard who ignites all her senses. Joining forces to plot Coburn’s downfall, Priss and Trace must fight the undeniable heat between them. For one wrong move, one lingering embrace will expose them to the wrath of a merciless opponent…

Reviews of Trace of Fever 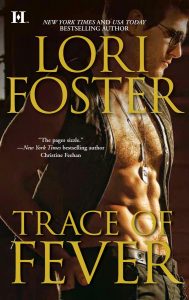 Priss stretched awake in the much cleaner and better smelling hotel room. The sheets were smooth, the pillows soft. She had enough space to actually move around without bumping into anything.

Sunlight crept in around the haphazardly closed curtains. It would be another gorgeous June day. Time to get up – except that she couldn’t move her legs, not with Liger stretched out in full splendor across her.

With a yawn, Priss crawled out from under the big cat and sat up on the side of the bed. For this particular morning, she was safe.

So many changes in such a short time.

Her mother’s death had been both a devastating loss and a blessing. Not a day went by that she didn’t miss her, but at least now she didn’t suffer.

Leaving her home should have been an upheaval, but with her motivation driving her, Priss had gotten through the packing, the road trip and the new town by rote. Comfort took a distant second to reaching her goals.

She’d settled in and even found Murray. She’d been right on track.

And then she’d met Trace… whatever his last name might be. She wasn’t buying the name he’d given her. Trace had as many, maybe more secrets than she did.

She enjoyed sparring with him verbally, found him physically appealing, and was intrigued by his cocky attitude. By far, he was the most tempting man she’d ever met.

Because she really didn’t know enough about him to be so captivated, her reaction to him was kind of… well, sick.

Sure, her instincts were good, and her gut told her that Trace was hero material. Despite a lack of facts, she’d already decided he was one of the good guys, an Alpha male who would step into danger to protect others, just as he had – so far – protected her.

And her cat.He was the complete and total opposite of Murray Coburn. So why was he working for that bastard? Or was he?

On her way to the bathroom, Priss glanced at the connecting door.

In the very next room, Trace slept.

Her heart pounded, and that was the biggest change of all. She joked with men, argued with and rejected them. But a pounding heart? Nope. Not once had she ever met a man who affected her that way.

Before leaving the bathroom Priss splashed her face and cleaned her teeth. A glance in the mirror showed her looking a little worse for wear.

Using both hands, she shoved back her hair from her face and gave herself a critical inspection. Before meeting Trace, she’d always accepted herself as a sexless woman, apathetic in most situations, methodical in her approach to life.

But around Trace she felt so much that her head swam. She’d gone to sleep thinking about him and, she just realized, she’d awakened with him on her mind.

She had just given Liger his food when a tap sounded on the connecting door. Priss’s heart leaped into her throat.

With excitement. Pure, sizzling stimulation. Suddenly she was wide-awake.

Tamping down her automatic smile, Priss leaned on the door. “Yeah?”

Still fighting that twitching grin, Priss tried to sound disgruntled as she asked, “Why?”

Something hit the door – maybe his head – and Trace said, “I heard you up moving around, Priss. I have coffee ready, but if you don’t want any –”

Being a true caffeine junkie, she jerked open the door. “Oh, bless you, man.” She took the cup straight out of Trace’s hand, drank deeply and sighed as the warmth penetrated the thick fog of novel sentiment. “Ahhhh. Nirvana. Thank you.”

Only after the caffeine ingestion did she notice that Trace wore unsnapped jeans and nothing else. Holy moly.

“That was my cup,” Trace told her, bemused.

But Priss could only stare at him. Despite the delicious coffee she’d just poured in it, her mouth went dry.

When she continued to stare at him, at his chest and abdomen, her gaze tracking a silky line of brown hair that disappeared into his jeans, Trace crossed his arms.

Her gaze jumped to his face and she found him watching her with equal fascination.

A little lost as to the reason for that look, Priss asked with some belligerence, “What?”

With a cryptic smile, Trace shook his head. “Never mind. Help yourself and I’ll get another.”

He lifted a hand in dismissal and went to the coffee machine sitting atop the dresser. His jeans rode low on his hips. The sun had darkened his skin, creating a sharp contrast to his fair hair.

Another drink was in order, and another sigh of bliss. Hoping to regain her wits, Priss said, “God, nothing in the world tastes better than that first drink of coffee.”

Trace looked over his shoulder, his attention zeroing in on her mouth, then her chest and finally down to her bare legs. “Oh, I don’t know about that.”

Sensually stroked by that hot glance and the low timbre of his suggestive words, Priss followed him in.

Trace gestured toward the small round table and two chairs. “Take a seat, Priss.”

“I don’t mind sitting.” But first… Priss finished off her coffee and looked at the full pot. “Is it all right if I get a refill?”

When Priss moved toward the coffee machine, rather than give her room, Trace leaned back on the edge of the dresser and watched her. She could detect his early morning scent of warm skin, musky male and palpable sex appeal. Delicious.

Would he smell that sinful up close, if she put her nose in his neck, or near that solid chest? Or… maybe lower?She eyed his gorgeous body, and raised a brow. “Doing a little flaunting of your own this morning, huh?”

“In deference to your delicate sensibilities, I pulled on jeans. Isn’t that enough?” 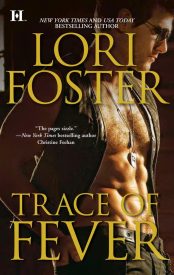 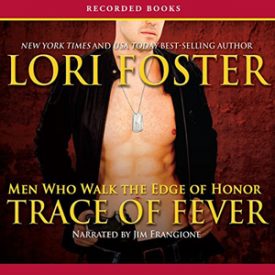