Book 0.5 in the Men Who Walk the Edge of Honor Series 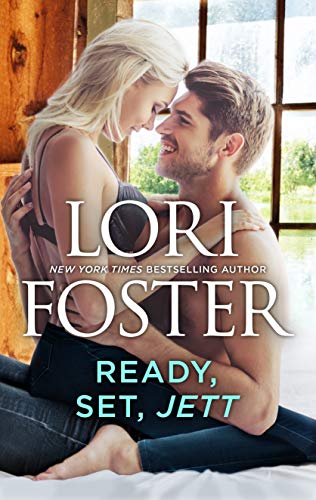 Book 0.5 in the Men Who Walk the Edge of Honor Series

All middle school teacher Natalie Alexander needs to get her head—and heart—together is a vacation from her no-strings romance with her sexy next-door neighbor. But her solo trip south turns into a disaster when gorgeous PI Jett Sutter turns up with another challenge…one she might not be able to resist.

is Book 0.5 in the Men Who Walk the Edge of Honor Series 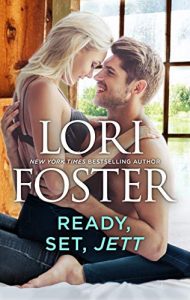 Hands on his hips, impatience growing, Jett Sutter paced the length of his living room while his youngest sister, Betts, blathered on about God-knew-what. She’d been at his door when he arrived home, throwing off his intricate plans and putting a damper on his fevered expectations.

Never would he deliberately hurt his sister’s feelings, but pretending interest had become impossible half an hour ago. A glance at his wristwatch showed that he needed to shower. He needed to… prep. When he thought of what he had planned, what he would do and with whom, his breath quickened and his muscles twitched.

It wasn’t an unfamiliar reaction when dealing with his super-sexy neighbor, Natalie Alexander.

Jett loved his family, he really did, but damn it, he needed privacy to deal with the blooming heat and anticipation of the next few hours. He needed…

The familiar sound of a Volkswagen bug pulling into the apartment complex parking lot cut short his thoughts. Without caring what his sister would think, Jett took two long strides to the patio doors and parted the curtains just enough to look out.

Damn she looked hot. Natalie was like his most elaborate fantasy, in the flesh, made up of scorching contradictions.

Long, corkscrew curls the color of dark honey danced around her face as she hurried from the miniscule cherry-red car with a bag of groceries in one arm, her requisite heavy book bag in the other, her enormous purse slung over her shoulder.

As usual when returning from work, she wore her school teacher duds of a long dark skirt, flat shoes and a crisp blouse under a warm cardigan. For Jett, it looked like fetish wear; a modest ensemble to disguise the centerfold body.

Seldom had Natalie mentioned teaching, and that was mostly before they’d become intimate. Since then, she’d gone out of her way to keep all conversation to a minimum.

It really burned his ass the way she fought to keep him at a distance.

Not that her evasive attitude had done her any good. He knew what grade level she taught, that she enjoyed reading political dramas and true crime novels, that she cried over commercials and laughed at birds when they visited the bird feeder off her balcony.

He also recognized the vulnerability she tried to camouflage with sexual bravado – at least, with him. Thinking of her utilizing that special brand of bravado with any other guy bothered him in ways he didn’t want to analyze too closely.

He knew that Natalie came from a background of extreme wealth and social influence, but the money and prestige hadn’t guaranteed her a warm, loving family.

Though Natalie had no inkling of his research, he’d uncovered quite a bit about her, personal and otherwise. If she did know, she probably wouldn’t like it.

At first he’d investigated her out of suspicion, because she’d come on so strong and had been so accommodatingly easy. As the quintessential school teacher, absolutely nothing about Natalie’s outward persona said “uncommitted sex.” Yet that’s what they had.

Later, he’d done more digging because damn it, he wasn’t used to any woman only wanting uncommitted sex with him. It didn’t make sense. Natalie never asked him anything personal, never wanted to go out to eat, or to a movie. She rebuked gifts and compliments, and disdained social settings of any kind.

All she wanted was him, in bed.

That should have been the perfect set up for a man intent on maintaining his bachelor status, but for whatever reason, Jett felt fickle about it. He wanted her to want more, damn it.

Now, as she exited her car, Jett watched her and knew by the way his muscles twitched and his skin burned that he was getting in too deep. Natalie had the most profound effect on him.

Confusion, he told himself. Curiosity and intrigue. Nothing more.

Once he knew why she’d built so many walls, he’d be able to scale them. They’d both have a good time for as long as it lasted, and neither of them would have regrets.

And with that goal in mind, Jett had a plan.

Using her hip, Natalie bumped the car door shut and, because of the brisk wind, hurried for the entrance. In late March, the weather was milder, but still pretty chilly.

Along the way to the apartment entrance, she glanced up at his window.

Jett made sure she couldn’t see him; God only knew what she’d think if she caught him watching for her. He’d look like a dupe, like a lovesick fool when, despite their burning compatibility between the sheets, she’d made it clear that she didn’t want anything more.

Sex. For her it was the beginning and the end of their relationship. With every other woman that he knew, he’d find that arrangement perfect.

With Natalie Alexander…no. Hell no.

Tonight, he had a plan to use her carnal nature against her. He’d keep her long enough to hash out a few things.

Thinking about his intent made him semi-erect and taut with urgency. He visualized her in his bed, stretched out, anxious for him –

“All right,” Betts said from behind his right shoulder. “Give. Who is she?”

Oh shit. How had he forgotten all about his sister’s presence?

Jett turned in what he hoped to be a negligent way. “A neighbor, that’s all.” With Natalie now home, his patience ended. He took Betts’ arm, swiped up her jacket off the back of a chair, and steered her toward the door. “The visit’s been awesome, but I need to shower.”

Laughing, Betts dug in her heels. “Get real, brother. I’m not budging an inch until you tell me every single juicy detail.

At twenty-six, nine years his junior, his sister wasn’t old enough and, he prayed, wasn’t experienced enough to hear everything that had gone on between Natalie and him. Never mind that Betts was only a year younger than Natalie.

“Not happening, Betts, so forget it.” Knowing his sister, he added, “And don’t you dare go blabbing to the folks, either.” The last thing he wanted was his mother snooping around in his private life. His dad would shrug it off; his mother, like his sisters, would make him nuts with questions.

Being thirty-five and independent in every way didn’t matter, not to his nosey family. He was the only son, with three younger sisters. For years he’d felt protective toward them all, and now they were determined to pay him back in kind.

Somehow, he got Betts halfway to the door.

“If you’re seeing someone, I’d like to meet her.”

Annoyed, he turned to stare at his youngest sister. “No.”

Because he wasn’t seeing Natalie, not in the traditional way Betts meant. They hadn’t had a single real date. The sum total of their time together had been spent either in bed, or getting to the bed. Occasionally in the foyer against the wall, once on the couch, once over the back of the couch –

“You’re not meeting her, so forget it.” Even if he wanted to introduce her to his family, Natalie only stayed around until the lovemaking ended. Then she hightailed it right back out of his life.

Hell, outside of sex talk, they’d barely even conversed. Jett told her what he wanted to do to her, with her, and Natalie always gave enthusiastic agreement. Period.

She’d made it abundantly clear that he was only good for sex.

Actually, she’d said he was great for sex; she hadn’t skimped on the compliments in that department. But she usually gave them while naked, draped over his chest, still breathing hard and rosy from a recent screaming climax.

Somehow, he had to work their combustible chemistry to his advantage so that Natalie would let him past her barriers.

“You look flushed, Jett.” Arms crossed, Betts surveyed him through narrowed eyes. “What’s wrong with you?”

Mood now soured, Jett said, “None of your business, so butt out.” He wasn’t about to explain to his youngest sis the scorching level of churning lust and… and whatever else it was that he felt.

Hell, how could he explain it to her when he didn’t quite understand it himself?

Her foot tapped the carpet. “Jett…”

Struggling for patience, he gave her a tight hug and then held her an arm’s length away. Dead serious, eyes narrowed and expression somber, he said, “If you love me, Betts, you will, just this once, let it go.” She hesitated, and he waited, staring her down.

With a huff, she gave up. “Fine.” Betts pulled free of his hold to don her jacket, jamming her arms into the sleeves with more force than necessary. “But it’s only because I do love you.”

Thanking her with great sincerity, he opened the door for her to go. Across the hall, Natalie’s door remained closed.

Betts kissed his cheek and back-stepped out, watching him with expectation the entire way. Keeping a straight face with effort, Jett waited until he saw her go through the glass doors at the complex’s entrance, and until she reached her car.

Heading back inside, he stripped off his clothes along the way. In his bedroom, he turned down the blankets, leaving them at the foot of the bed. Determined on his course, he knelt near the head of the bed in the center of the mattress and wove a long specialized restraint through the headboard slats. A sliding “noose” at each end would be perfect for capturing Natalie’s delicate wrists.

His abdomen clenched and his breathing hitched; he tugged experimentally and decided it would serve the purpose.

He glanced at the footboard, considered putting the restraints there too – but no. On a purely carnal level, he loved the idea of seeing Natalie tied spread-eagle to his bed, but he didn’t want to push her so much that she felt compelled to object.

Now sporting full wood, Jett went to the shower. He had completed only the most cursory bathing when his attuned ears heard Natalie’s familiar knock at his door.

Drawing a deep breath and shutting off the water, he propped a hand flat against the tile wall, dropped his head, and took a moment to regain his control.

After doing a half-assed job of drying, he wrapped the towel around his hips and strode to his apartment door to let her in.

There wasn’t anything he could do about the tenting of the towel. He wanted her, bad, more so with every minute that he knew her.

Today he’d make sure she wanted him just as much, in just as many ways. 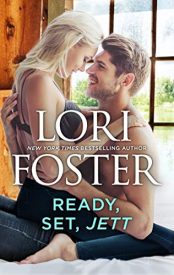 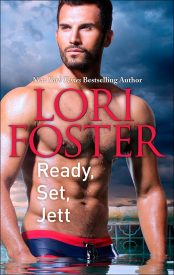 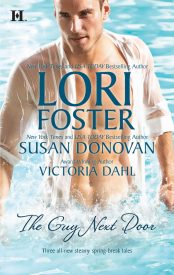