Book 2 in the Winston Brothers Series

Tangled Dreams is featured in the anthology Wildly Winston and is not available on its own.

Book 2 in the Winston Brothers Series

Tangled Dreams is featured in the anthology Wildly Winston and is not available on its own.

To uncover a family heirloom, two ghosts orchestrate a post passionate tryst between a demure lady and the sexy bartender she can’t get out of her mind—Chase Winston…

is Book 2 in the Winston Brothers Series

Even though it was an incredibly busy night at the bar, even though he could barely hear the newest order over the din of loud conversation, music, and laughter, he heard her. Her every thought. Chase watched her, saw that her mouth wasn’t moving, that she wasn’t actually talking, but he could still listen to her.

She was on the other side of the bar, standing by a group of Halloween decorations that his sister-in-law had designed out of a bunch of pumpkins he and his brothers had carved. The haystack and jack-o’-lanterns were festive and provided an amusing backdrop to the serious expression on Allison Barrow’s face. He’d know her several months now, ever since his brother had married her best friend and boss, but he’d never before noticed how cute her round, wire-framed glasses looked on her small nose or the fact that she had a tendency to straighten them needlessly.

He Noticed now.  But why?

His youngest brother, Mack, bumped into him.  “Hey, Chase, orders are piling up here. You want to stp daydreaming and help me out?”

Chase gave Mack a distracted glance.  “Come here a minute, will you?”

“Over here.  Come on. Now stop right there.” Chase positioned him exactly where he’d been standing.  Mack was in his last year of college, still studious and alert.  Surely he’d pick up on something.  “Now, look over there at Allison.  See her, right past the redhead with the skinny guy in a suit? By that Halloween display?”

Mack turned to stare at Chase in disbelief.  “What’s she saying? How the hell should I know? I can barely hear you, and you’re only two inches away from me.”

With a sound of disgust, Mack again stared toward Allison, Chase saw his gaze warm a little, then go over her from head to toe, and for some reason, that annoyed him.  Now that he’d really noticed Allison, he didn’t particularly want Mack doing the same.  He’d always thought Allison was cute, in an understated, sort of just-there way, but suddenly she looked very sexy to him.  She was twenty-five, on the short side, dark blue eyes, medium blonde hair.  Nothing special.  Certainly not the type of woman to appeal to his baser side.  But tonight he couldn’t pull his attention away from her.  He suddenly heard her every thought when he’d sure as hell never been a mind reader before. And he only heard Allison, no one else.  There was something going on between them, and it didn’t make any sense.

“She looks different, doesn’t she?”

“It’s the clothes,” Chase explained, having noted the difference himself.  It had taken him several minutes to finally pinpoint what made her look so unusual tonight, so …sensual.  “She’s wearing some sort of old-fashioned, vintage dress.”

In truth, she looked like a woman straight out of film noir.  The dress was a deep purple gray, and even from a distance, Chase could see that the color did things for her eyes.  Or were her eyes just brighter tonight, more alert?

There was subtle black beading on the top of the dress that caught the bar lights and drew his attention repeatedly to her less-than-outstanding bustline.  At least he’d never thought it outstanding before.  But now…Now he was imagining her naked and almost going crazy because of it.

The waistline was tight, showing off her trim build, and when she turned, Chase not only saw that she had on seamed stockings but also that the damn dress had a flat bustle of sorts, a little layering of soft material that draped real nice over her pert behind, a behind that would feel just right against his pelvis if he took her from the back… 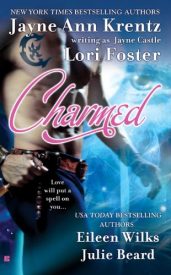