Part of the Winston Brothers Series 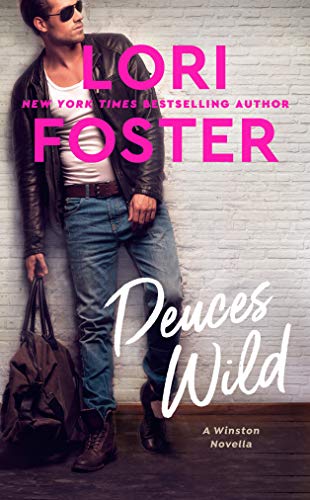 Part of the Winston Brothers Series

is Part of the Winston Brothers Series 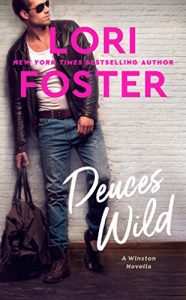 Dexter Winston paced across the floor, but Hart, his twin, didn’t let him go far. When he turned, Hart was right there, black eye flinching, a purpling bruise on his forehead, and determination in every line of his body.

He wanted an answer.

Blocking Dex’s restless pacing, Hart said, “Quit trying to think of reasons to refuse, will you? It’s not like we haven’t fooled people before.”

“Oh gawd, don a hair shirt, why don’t you?” Hart laughed at his reaction. “It’s not like we switched beds or anything.”

No. They’d fooled girls to see if any of them could tell them apart. Unfortunately, they couldn’t.

You’d think the inherent intimacy of dating a person would enable a woman to know the difference, but… “We haven’t duped neighbors,” Dex pointed out. “We haven’t duped…” He gestured. “Everyone.”

“Think of it as a challenge.” Hart plopped down on Dex’s sofa and spread his arms out along the back. These days, he was more muscular than Dex. Harder edged. And he had those very distinguishing bruises.

It all seemed so obvious to Dex. “It’ll never work.”

“All you need to do is hang out at my place, reply to my emails and go through the snail mail, let me know about anything important…”

“And if you get a commission?” Dex asked. “Am I supposed to paint it for you, too?”

“Hell no.” Hart snorted. “Not that you couldn’t, but your work is too damn morbid. Folks would either catch on that it wasn’t me, or they’d think I went off the deep end.”

Cursing low, Dex strode into his kitchen and grabbed a cola. Automatically, he got one for Hart, too.

As twins, they shared not only looks, but tastes and talents, too. Either of them could have chosen a career in writing, or art. But Hart was right – he was far more somber, bordering on pessimistic. Hart enjoyed life more. He played harder and took greater risks just for the joy of it.

A total opposite, Dex stayed holed away in his office, glued to his computer while he created his stories. As a published novelist, he relished his privacy.

As soon as Dex seated himself beside his brother, Hart started on him again.

“I have to do my training out of town. Not only is this an opportunity to get in with an excellent camp, but SBC promoters will be visiting.”

“To hand out contracts?”

“Possibly. I don’t know. But if I stuck around here to train, the family would show up and start badgering me for details. Joe especially.”

“Or Cole, or Chase. Somehow they always know when family stuff goes down.” Dex shook his head. “Nothing ever stays secret with the Winstons.”

“Even if they don’t catch on that I’m training, there’d be questions about my bruises.”

Dex lifted his canned drink. “Nah. Most would figure a woman popped you for being a jerk.”

Rather than dispute that, Hart shrugged at the possibility. “If I’m going to give my all to the big opportunity, then Dex, I need your help.”

Dex didn’t know enough about the professional side of mixed martial arts fighting to be sure, but he assumed the training would take months. “I am not you.”

Hart looked him over. “Close enough. I’m a little more bulked up now, but thanks to our sparring matches, you’re still plenty fit.”

They were both runners, both natural athletes, and both blessed with the Winston physique – or so their cousins always claimed. Joe especially seemed to gather attention for his physical presence. But then, Joe worked at it.

If you looked around the family, it appeared to be an inherent trait. The men were tall and naturally strong. Even into their advanced years – a description Hart liked to apply to Joe, just to see him riled – they retained their muscular forms.

“I’ve only lived in my apartment for six weeks now, and I’ve been so swamped, I haven’t really made friends with anyone yet. Thanks to your last deadline, you haven’t visited me there, so no one knows I have a twin brother.”

All true, but still…

“We look enough alike,” Hart continued, “that as long as you’re in the right place and cop the right attitude, no one will question it.” He chugged back half the cola, belched, and then, with an annoying, cocky grin, said, “Given that we’re both currently unattached makes it easier. Just think if I had a steady girlfriend you had to appease.”

Appease? Dex rolled his eyes. “I’d definitely tell you no.” Hart’s preferences toward female company were not his own.

His brother laughed. “You could use a hot date, man. It’d do you good.”

“Newsflash, brother: I don’t need your leftovers. I can get my own dates.”

Exasperation prompted Dex to a verbal challenge. “How do you know? You think I keep you informed of my every move?”

That got Hart’s interest in a big way. “You sly dog, have you been holding back on me? C’mon, brother, spill it. Who is she?”

Knowing Hart wouldn’t relent, Dex slumped into his seat. “No one.”

“Yeah, that’s what I thought.” Disappointed, Hart settled back. “Know what your trouble is?”

“I have an annoying twin brother?”

“Yeah, but other than that.” With a friendly punch to Dex’s shoulder, Hart said, “You’re too damn particular. Every date doesn’t have to lead toward a serious relationship.”

“Yeah, well tell that to the women. One date usually gives them all kinds of ideas.” And that did pose a problem, because Dex had an aversion toward theatrics. Why couldn’t he meet an upfront, honest, independent woman who wanted him, enjoyed his company and shared his likes and dislikes – but didn’t act like she needed him? “It can get insufferable.”

Watching him, Hart said, “But that’s not what bothers you, is it?”

Cradling the cola against this abdomen, Dex shrugged. The biggest problem was his own disappointment, but he saw no reason to get into it with Hart.

As usual, ignoring Hart didn’t slow him down.

“I know, and I understand, because I want the same thing.”

“A real connection. Not just perfect sex – though I have to admit, really great sex makes it almost worthwhile.” He winked before turning serious again. “I’d like to think if I ever find the right woman, she’ll know the difference between us right off.”

Dex gave him a bemused stare. Hart was such a diehard bachelor that the idea of him settling down seemed ludicrous. Many ladies had tried to get him to commit, but they’d all failed.

Dex, on the other hand, wanted hearth and home – with the right woman. Like Hart, he needed her to know him from his brother, to see him as an individual. He had a very specific idea of the woman he wanted, and so far, no one even close had shown up.

And that’s what she’d have to do: show up.

Other than family gatherings, he didn’t expend much effort socializing. There were so many plots and characters in his head that he couldn’t seem to drag himself away from his computer long enough to dedicate the time necessary to finding that perfect significant other.

Disgusted with his own thoughts, Dex shook his head. “You were the one just saying we’re enough alike that we should fool everyone.”

“Sure,” Hart said. “Everyone other than the one. When I find her, that’s how I’ll know she’s right.”

Sounded like a good plan to Dex – if the right one ever presented herself. 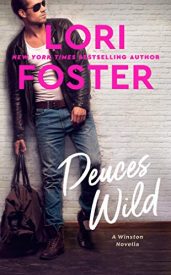 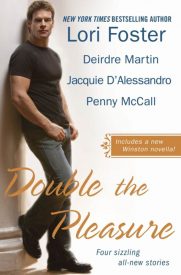