Part of the Winston Brothers 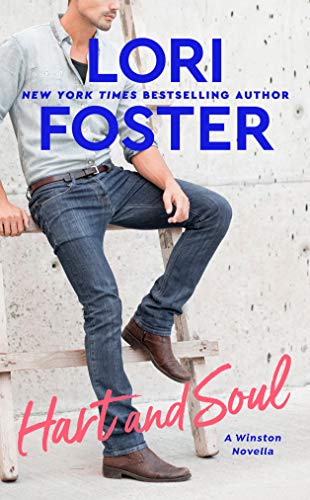 Part of the Winston Brothers

Hart Winston’s switch with his identically hot twin brother has landed him in some serious foul play, it’s a safe bet that in the game of love no one is going to follow the rules.

Reviews of Hart and Soul

is Part of the Winston Brothers 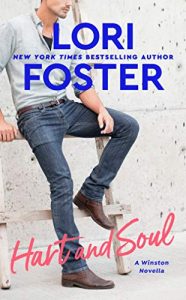 Hart Winston tried to prepare himself, but with every breath his anxiety level ramped up until he felt sweat on the back of his neck.

What did she want? In his gut, he knew it had be something important for her to be so persistent in seeking him out. Lisa Vogle wasn’t a woman who chased any man. For sure she wouldn’t chase him.

He had his suspicions about the message she had to give, and mixed emotions kept him tightly coiled with the possible consequences.

He wasn’t a coward, damn it. He would face up to his responsibilities as all the Winston men did.

Yet, he continued to sit in his car in the blistering parking lot in front of Lisa apartment building, trying in vain to sort through his feelings, not only about Lisa, but about the life ahead. To his twin, Dex, he had denied caring about Lisa. He’d even denied being attracted to her. He’d called her “plain” when that adjective could never be applied to a woman with her vitality, her intelligent and grace. No, she didn’t look like most of the women he dated. She didn’t act like them either.

And that, in part, is what unsettled him.

Enough. Turning off the car, Hart braced himself for what lay ahead and stepped out onto the burning blacktop. Waves of suffocating heat wafted up to amplify his already churning emotions.

He’d make it work, he told himself. So Lisa wasn’t like most women he know. In many ways, she was better.

It didn’t matter that he’d considered her a one-night stand, a moment of weakness.

He couldn’t lie to himself; he’d thought of her often even before she began tracking him down. He enjoyed her company. He’d really enjoyed sex with her.

Might as well get on with it. Dexter expected a full report, as did his cousin Joe. Hell, if his suspicions were correct, the whole damn family would know his private business in no time at all.

Staring through the mirrored sunglasses, hands on his hips, Hart surveyed Lisa’s building. From the parking lot he could see the side of the balcony where she liked to sit in the evening drinking hot tea. Not a beer, never that. Not even a cola. She held those dainty tea cups with all the grace of a queen.

He smiled at the image, caught himself and scowled again.

Other than a light that shone from behind closed curtains, her place looked empty. Hell, it was only eight o’clock, but Lisa was the ‘early to bed, early to rise’ sort. She was also a dentist, of all things. Conservative, uptight and buttoned down, very proper – in a hundred different ways, their personalities and lifestyles would clash.

But he’d slept with her in a moment of lust-inspired insanity, a moment that had plagued his thoughts ever since. And now she’d tracked him down for a reason, so he had to address the repercussions.

Before he could change his mind, Hart strode up the front walk and into the building. Cool air conditioning chilled his skin as he bounded up the stairs and to her door where an artificial summery wreath hung. It was homey, domestic – like Lisa.

Hart cursed under his breath and knocked.

He knew she had to be home, but she didn’t answer the door. Scowling, determined to get the uncomfortable confrontation over with, he knocked again, harder this time.

The door jerked open, but only as far as a chain allowed. Without showing herself, Lisa said, “Go away, Hart Winston, and stay away.”

Out of sheer instinct, Hart thought to poke his foot in the door before she could close it.

She smashed it hard, and kept on smashing, hoping, no doubt, to encourage him to remove the barrier.

He put his shoulder into the door. “You’re breaking my foot, woman.”

“Remove it if you don’t want to lose it.”

He grinned at the surprise sarcasm. She always did that to him, amusing him at the oddest moments, drawing him in… turning him on. Again, he shook off the unfamiliar feelings. “We need to talk.”

“I have nothing whatsoever to say to you.”

Baloney. He added some pressure to the door to relieve his poor foot. “Then why the hell did you track me down?” His voice rose in annoyance. “You called my brother several times. You called my cousin –”

“Brother? I didn’t even know you had a brother. Now get lost.”

Hart drew a breath and tried to sort his way through her odd behavior. She was usually so proper, she wouldn’t have told an intruder to get lost. And he was not an intruder. “Come on, Lisa, listen to me. I’m sorry it took me so long to get back with you –”

“No big deal. It doesn’t matter, not anymore. Leave with a clear conscience.”

Hart’s blood ran cold. What had she done? Had he taken so long to contact her that she’d given up on him? Damn. “What does that mean, Lisa?”

She stopped pressing on the door, but still didn’t show herself. More composed and with less anger, she said, “It means just what I said: it doesn’t matter. I was going to tell you something, but… I’ve changed my mind. So just… go away. Forget I ever called.”

His stomach knotted. “Sorry, but I can’t do that.”

So she thought to cut him out? Hart sought his own measure of control. “I was out of town. I can explain where and why if you let me in. But the point is that I couldn’t get in touch. The messages you left for me went to my twin, Dexter. He was sort of filling in for me so that no one would know where I was and –”

Her face appeared between the door frame and the door. “You seriously have a twin?”

Hart stared. “What the hell happened to you?” He studied her, but even beyond the massive curlers in her brown hair, and the fact that she had her glasses off, she looked…funny. Sort of unbalanced somehow.

“Since when do you have a twin?”

“Since… birth?” He frowned. “What did you do to yourself? Is something wrong?”

Her brown eyes rolled. “Move your foot and I’ll let you in, but only for five minutes.”

“You promise?” If he pulled his foot out and she locked the door, he’d lean on the bell until she caved.

Lisa narrowed her eyes, which only made her look funnier. “Move. Your. Foot.”

Hart moved it. The door clicked shut, he heard the rattle of the chain, and she opened it again.

“Come in before my neighbors start to complain.” She stood to the side, holding the door for him.

She wore a long robe, and under it, Hart saw a peek of pink lace in her bra.

She noticed the direction of his attention and clutched the lapels of the robe together. “Now,” she said. “I had wanted to talk to you, but you were such an ass, and so much time has passed, that I’ve changed my mind.”

Hart gestured at her face. “Something’s not right.”

She rolled her eyes again. “I have make-up on one eye, so I’m lopsided.” Her frown pinched with accusation. “You interrupted me.”

Yeah, that was it. On her right eye she had shadow and liner and mascara. The other eye looked small and mean in comparison. His brain scrambled from that to the idea of her wearing make-up.

From what he recalled, Lisa went au natural, and it suited her. With her dark eyes and lashes, her glossy light brown hair, she didn’t really need much primping.

So why had he considered her so average? Shaking that off, Hart went over to her couch and dropped down to sit. “Interrupted you from what?”

Both eyes widened. “Don’t you dare get comfortable, Hart Winston. This conversation is over and you have to go.” She fluttered over him. “Get up.”

She forgot to hold those lapels together. Her generous breasts overflowed the sexy lace cups. Hart sprawled back, his arms spread out, his jean covered legs relaxed. “That’s some sexy looking underwear for you, isn’t it?”

She didn’t blush. But she did look ready to flay him alive. She tightened the sash on her robe, inadvertently emphasizing the narrowness of her waist and the lushness of those full breasts. “Get out, Hart.”

“Not yet. You have something to tell me.”

“Wrong. I had something to tell you – but not anymore.”

“I want you to tell me anyway.”

“Tough. You should have shown up when I first called.”

Unable to keep his brain on task, Hart found himself studying her body. He needed to know what she had to tell him, even if he had to insist, but he just couldn’t stay focused. “I never figured you for sexy lingerie.”

Well hell. Hart watched her face and grinned to himself. Not exactly to the point, but all the same, he waited for her reply.

Her back went straight and her mouth pinched. “I have always worn feminine underwear.”

Cocking a brow, Hart said, “Really? Because I don’t remember you –”

“You turned out the lights, goofus. How could you have seen anything?”

Goofus? Well, that was rude. He sat forward with a frown. “I turned out the lights for you.” She was shy, right? Timid and modest. He’d been trying for consideration, hoping to put her at ease…

“For me?” Lisa laughed – a sound devoid of real humor – and crossed her arms under her breasts in a belligerent stance. “I wanted the lights on, bud. I wanted to see you. I wanted to see everything.” 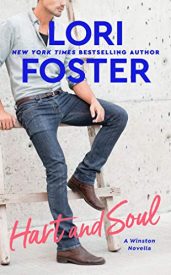 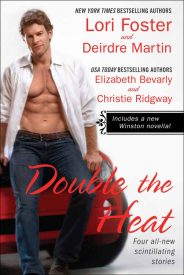