Book 3 in the Servant Series by L.L. Foster 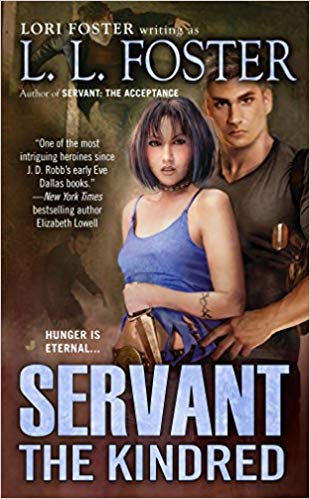 Book 3 in the Servant Series by L.L. Foster

Gabrielle Cody is a paladin. God’s enforcer on earth. But she’s not sure she can endure the life of a holy warrior. Her relationship with Detective Luther Cross is under constant strain already, and its going to get worse.

There is a monster feeding off of human blood, flesh, and souls and Gaby must stop him. But her passion for Luther distracts her from the terrible connection she has with her quarry—and the creature’s desire to devour her.

Reviews of Servant: The Kindred

Fans will be thrilled with this latest Servant installment.

L.L. Foster's dry wit and captivating characters keep this series fresh and entertaining.  Action, adventure, romance — what more could you ask for?

is Book 3 in the Servant Series by L.L. Foster 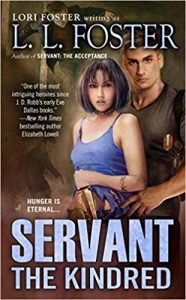 For long minutes, what began to feel like an eternity, Gabrielle Cody fought the inevitable. Naked on Luther’s king sized bed, she stretched taut as sweat beaded on her skin and her teeth locked.

And she fought it.

As her heart buffeted too hard in her chest, she repeatedly fisted her hands, clenching and unclenching the smooth, clean sheets beneath her. Exiguous moonlight snaked through a part in his heavy bedroom drapes, sending a silvery dart to cross the floor and crawl, with painstaking slowness, up the wall.

So inappropriate to the likes of her.

That Gaby could hear Luther in the bathroom finishing up a hot shower was the only salvation, the only measure to fight the staggering call. It dragged at her, commanding acceptance, gnarling her muscles, relentless in its claim on her.

She squeezed her eyes shut and thought of Luther, remembered his pleasure as she’d capitulated to his demands.

Demands to join him, to try for a normal life – to give them, as a couple, a chance.

He was a fool. She was a fool for accepting even the slightest possibility of a normal life, a real relationship.

Before excusing himself for the shower he’d smiled at her, thrilled to have her in his home, anticipation bright in his eyes. Luther thought he’d gotten his way. He thought he had Gaby where he wanted her.

Be careful what you wish for.

Another shaft of pain pierced her. It was always this way – the bid to fulfill her duty was a wrenching agony she couldn’t fight. Whenever she’d tried, the pain had grown insurmountable.

As it did now.

Sweat trickled down her temple to soak into Luther’s pillow. Already she soiled his fine home. If she stayed, she’d turn his entire existence black with depravity.

Her breath caught as the shower turned off. Luther would not expect to find her in his bed. No, he thought she was downstairs, waiting, where she should have been, where he’d left her. He wanted to go slow, to give her time.

But God knew, time wasn’t always something she had.

Tonight, right now, her time had run out before she’d even begun.

Damn her plight. Damn her duty.

For so long now, Detective Luther Cross had tried to worm his way into her dysfunctional, psychotic life – and she’d resisted.

No matter his claims of “knowing” her, of “accepting” her and her strange eccentricities. He might think he had an inkling of what she did as a paladin, and why, but he didn’t, not really. He couldn’t.

Why had she come here?

Tears, salty and hot, trickled along her temples, mingling with the sweat. Her body strained as she tried to find just a few minutes more, just enough time to have Luther. Once. A memory she could keep forever…

But the relentless pull and drag on her senses, the encompassing pain that twisted and curdled inside her told her to stop being fanciful.

Should she leave without telling him? Make a clean break of it and let him wonder, let him worry.

Let him give up. On her.

Or should she try trusting him?

No, no never that. She couldn’t.

The pain lashed her, impatient for obedience, and Gaby knew she couldn’t resist it any longer. As she sat up, she cried out – and the bathroom door opened.

Luther stepped out, buck naked, tall and strong and oddly beautiful for a man. That stunning golden aura swirled around him, bright with optimism, with promise of all that was good.

All that was the opposite of her.

Seeing her, he drew up short, stared for a moment. His hot gaze moved over her body, but not with lust as much as concern. “Gaby?”

“I was waiting…” She gasped, nearly doubled with the physical torment of the calling. “For you. I was willing, Luther. I was anxious. But…” She staggered to her feet, unseeing, choked with the need for haste. “But now I have to go.”

He remained steadfast, still, watching her. “Where?”

How could he remain so composed, so…detached, in the face of what she was, what she had to do? “I don’t know yet.”

She fumbled for her shirt and dragged it on.

But she was a paladin, and being interested in a man, even a man as irreproachable as Luther, didn’t change that.

Luther didn’t ask any more questions, he just dried with the speed of a man on a mission – all the while keeping his gaze glued to the naked parts of her.

“Don’t be fucking stupid.” She stepped into jeans, almost fell, and had to stop, had to gnash her teeth and squeeze her eyes shut in an attempt to contain the overpowering draw, but she knew, the only relief would be to give in.

And she would – once she was away from Luther.

It was his nearness now that made the pain bearable at all, that gave her the opportunity to delay, to explain. “I work alone.”

“Not tonight, you don’t.” Already dressed in a black T-shirt, jeans and sneakers, he reached for her. His hand touched her face, smoothed back her damp hair and some of the awful, distorting agony dissipated.

How could he affect her so strongly? How could a simple touch from him alleviate the agony?

From the day she’d met him, he’d always influenced her this way, bringing clarity in the midst of the turbulent summons, easing her misery, calming her heart.

With the short reprieve, Gaby slapped his hand aside and after stepping into her sandals, grabbed up her knife. She secured it in a sheath at her back. “I’ll say it once, Luther. Stay out of my way.”

And then, unable to resist any longer, she gave herself over to her duty.

Once accepted, it lashed through her, jarring her body, rolling her eyes back, straining her spine. In the peripheral of her senses, she felt Luther there, not touching her, not deterring her, but keeping pace as she moved forward, out of his bedroom, out of his house – and into the hell that was her life.

She raced so quickly that Luther could barely keep up. The seconds it took him to lock his front door almost let her get away. Ignoring the blustering morning air and lack of sunshine, he trotted across his lawn after her. Fallen leaves scuttled over his shoes. The autumn air nipped.

Gaby never noticed. She was impervious to the weather, and to his calls for her to wait.

When Gaby started past his car, he finally caught up and dared to touch her just long enough to suggest, “I’ll drive.”

With her eyes unfocused, eerily vague, she moved to the car door he’d opened and sat with a sort of charged energy that had her teeth sawing together, her brows pinching and her chest heaving.

Pained by the sight of her, Luther bolted around to the driver’s side and got in as quickly as he could. He started the car, turned on his wipers to counter the heavy fog, and pulled out.

“Other way,” she said in a voice faraway and hollow enough to send fingers of unease crawling up his nape.

Striving for calm, Luther turned the car, alternately looking at Gaby and watching the street. Dark clouds threatened a downpour that shadowed the colors of changing leaves. It’d be a cool, miserable day – perfect for his introduction into the arcane phenomenon of Gaby’s existence.

The astonishment of seeing her naked, in his bed… well, she hadn’t given him time to assimilate that, to get his visual fill before she’d gone all ominous with recondite purpose.

Her features now were sharper, distorted the way he’d seen before, but amplified beyond anything familiar. This, he realized, was Gaby in the zone. She’d warned him against seeing her like this, tried to prepare him, but the surreal qualities gripping her had no explanation other than supernatural.

Vibrating with repressed strength and dynamic force, she paid no attention to the scenery or direction he took. Perched at the edge of her seat, one of her small hands gripped the dash and the other squeezed the side of her seat, near her hip.

Her pale lips barely moved when she intoned, “Left.”

Luther had to cut across traffic to make the turn, but he didn’t argue with her. Warring with the need to show his trust, to give her reason to trust in return, was the image of her bare body, there for him.

Never had he wanted anything or anyone as much as he wanted, needed, Gabrielle Cody. And that in itself felt influenced by a higher power. From the day he’d first met her, he’d felt a draw to Gaby unlike anything recognizable to an experienced, educated adult.

As a man of faith, Luther gave himself over to the desire, to Gaby.

But as a man of law, a man who enjoyed controlling his own fate, he prayed for guidance and understanding. In his guts, he knew he belonged with Gaby. But his mind balked at the idea of playing a role in her self-devised sense of destruction against evil.Servant: The Kindred 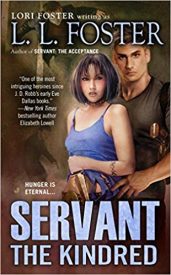