Book 1 in the Servant Series by L.L. Foster 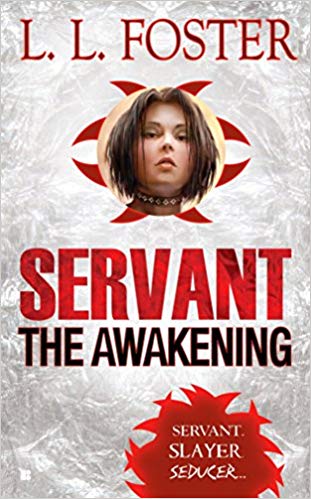 Book 1 in the Servant Series by L.L. Foster

Gabrielle Cody has the ability to see the demons among us as they really are-and the responsibility to destroy them. She can’t allow anyone to get in her way, even the magnetic Detective Luther Cross. Sensing a malevolent presence watching and stalking her, Gaby is drawn again and again to an abandoned hospital surrounded by an aura of sickness and suffering-and unimaginable evil.

Reviews of Servant: the Awakening

The gritty, atmospheric, inner-city setting, graphic violence, and raw language are perfect for a story that unfolds, scene by scene, like a graphic novel and cries out to be graphic-novelized en route to the movies. May this be just the first in a long series.

Entertaining paranormal romantic suspense that grips readers…Romantic fantasy readers and fans of Buffy and the movie They Live will want to read the first tale in the human war against demons.

Dark, gritty, raw…urban fantasy at its finest… As can be expected from the darker alter ego of Lori Foster, L.L. Foster delivers characters that are engaging yet in your face…

Extras for Servant: the Awakening

is Book 1 in the Servant Series by L.L. Foster 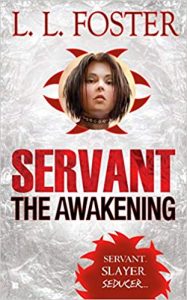 The crimson sunrise spilled into the cramped but tidy room, bringing with it the monotony of responsibility and the taint of rancid malevolence. Funny, how people always assumed evil lurked in the shadowy night, that it wore a face of frightening proportions, that it could – in any way – be predictable.

With the 9-millimeter resting in her hand, her finger curved around the trigger, Gabrielle Cody lay unmoving. The knife strapped to her back dug into her spine with reassuring familiarity. Even in sleep, her muscles stayed taut, her body prepared.

Today, her twenty-first birthday, dawned no different from any other. Had she really hoped to have a respite from the grueling duty?

But no matter how Gabrielle strained and resisted, she couldn’t deny the pull. With each second that ticked past, the clawing from within swelled, screaming louder inside her head, making her guts churn and her blood rush hot until the walls of her chest burned like fire. With a tearing groan and a stiffening of her legs, she narrowed her eyes and did her best to focus on the cracked and stained ceiling.

The silent command resonated within her head, just like the inexorable draw that refused to be ignored.

Battling it brought a light sweat to her skin, leaving her naked body slick. Her breath soughed in and out. The lumpy mattress took on the appeal of hard gravel, urging her to start the day.

“Fuck it.” Gabrielle thrust herself off the bed in a rush of acceptance. Her bare feet padded in hollow silence across the floor to the open window, where she stared at the hazy sunrise swimming on the horizon. The mid-June day would torture with heat and humidity – perfect for her birthday.

As long as it didn’t storm, she could function. But if black clouds moved in and the thunder began to belch and bluster… Just thinking of it made her palms damp and her throat tight. Shit. She might as well fear the dark or the occasional spider while she was at it.

She snorted, scrubbed at her tired eyes, and surveyed everything within her range of sight.

As usual, her attention landed on the playground first, surrounded by a sturdy chain link fence that couldn’t stop a damn thing and would offer no protection from the real threats. By midmorning, laughing, innocent children would be at play with an excess of noise and excitement.

The now abandoned elementary school drew her notice next. Once, long ago, it taught dreams and encouraged illusions. They’d put up the fence to keep the kids in, ignorant and oblivious to the true dangers lurking beneath a veneer of social acceptability.

All along the road, traffic multiplied in a scorched wave of colors and sounds and exhaust fumes. It hadn’t rained in weeks and brittle tree leaves rustled under the encouragement of a hot, restless breeze.

Gaby drew a breath – and held it.

Somewhere out there, somewhere that no one could see or suspect, horrible things waited, taunting her senses, painfully pricking her nerves, making her vision slide within. She knew it. She always knew it.

She fucking hated it.

Wrenching away from the window, she unbuckled the knife strap from around her waist and carried it, with the heavy gun, into the bathroom. In her efficiency apartment, it was the only closed room. A single large room housed everything else: her bed, her hot plate, an old rickety desk and a miniscule dresser, a microwave and small refrigerator.

After setting the weapons aside, she double bolted the special door she’d installed for her peace of mind, and then turned on the shower. The original door and flimsy lock hadn’t taken much more than a single punch before giving way. Now, when the rush of water impaired her perceptions, it’d require a talented locksmith or a true behemoth to break in.

Whenever circumstances like sleeping or bathing left her vulnerable, Gaby did all she could to protect herself. The shower, with its old rattling pipes, made more noise than most. At times, it sounded like the demons from hell were trying to crawl through the walls.

Some would call her specialized precautions paranoid.

But then, most had no idea that crazed demons did crawl the earth.

Death didn’t frighten her. No, there were times when Gaby prayed for death to take her.

What she didn’t want, what she couldn’t bear to contemplate, was unending torment. She could handle pain; she always had. But if the pain had no end…

Locking her teeth, Gaby stepped under the tepid spray and let the water hit her face, trickle down her body. It didn’t dispel the truth of what she had to do, what she put off doing. It didn’t ease her muscles or alleviate the agony that became a part of her, more so with every passing moment.

It only removed the sweat and took the sting out of her eyes.

Lingering in the shower, she cleaned her teeth while straining her ears to hear any sound of intrusion. Ten minutes later, clean and dry, she combed back her short dark hair and dressed in a way that wouldn’t draw attention. Birthday or not, she could no longer deny her God-appointed duty.

Closing her eyes and relaxing her mind allowed her to drop her resistance, leaving her open to the summons.

Like the spike of a frozen ice pick, it struck her nape, then slowly, raggedly, scraped down her spine and straight into her soul.

Her muscles jerked and twitched, and her mouth opened on a gasp as the pain dug deep, expanding to invade her every nerve ending. She didn’t shy away from the agony; she knew it would do no good. As an incentive, the physical misery would remain until she finished the job.

In her practiced way, Gaby evened her breathing, accepting, embracing the pain so it could revitalize her, heightening her awareness and honing her instincts to razor sharpness.

Today someone – some thing – would die.

She knew, because she’d kill it.

But not with the gun. Gun blasts made too much noise and drew too much attention. What Gaby had to do, no one would understand.

So no one could know. 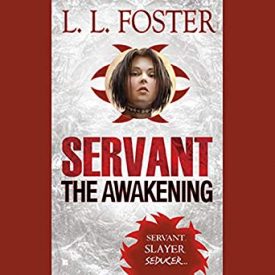 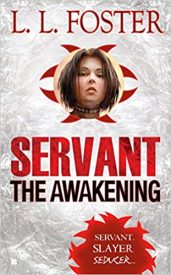