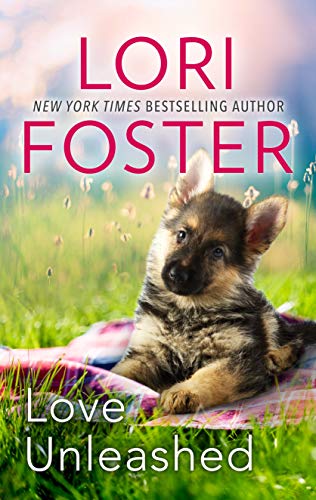 Some people need an extra nudge to get to happily-ever-after, but the sparks will fly for this couple with a little bit of help from man’s-and woman’s-best friend.

When their recently adopted pets—a cat named Cate and a dog named Doug—become inseparable, Evan Carlisle and ER nurse Cinder Bratt go from neighbors to best friends. After a frightening encounter with a patient, Evan insists Cinder stay with him until the culprit is caught. Will these two become something more with a little nudge from their four-legged friends?

Love Unleashed is one of Lori’s benefit books—the proceeds will go to the Animal Adoption Foundation.

is Part of the Carlisles Series 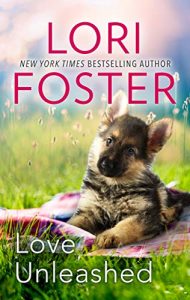 Sitting on the sofa in front the television with his brother, his best friend, his cat, and his neighbor’s dog, Evan Carlisle stared at the screen – but his thoughts were well away from sporting events, and smack dab on the neighbor.

Hot, with a capital H – not that Cinder seemed to realize it.

Idly he stroked her dog, Doug, while his calico cat, Cate, purred beside him. Yeah, he and Cinder had come up with the names together after a trip to the shelter almost a year ago – only a few months after meeting each other and hitting it off.

She’d wanted a dog so he’d gone along – but Cinder wasn’t the only one to come home with a pet that day.

She and Doug had bonded, just as he and Cate had.

And Cate and Doug had already been best friends, so… it had all worked out.

He’d once teased Cinder, saying they should get a house together and adopt a horse that they’d name… Horace.

She’d laughed, swatted at him – and totally missed the implied interest in his suggestion. Cinder missed all his clues, and never gave any of her own.

She was a pal, and it drove him nuts, a little more so every day.

Suddenly Doug’s ears perked up and his head lifted, alerting Evan to Cinder’s early arrival. Her big German shepherd never missed a thing, especially where it concerned Cinder. He was the most vigilant dog Evan had ever known, but also gentle and loving.

Even to his cat, Cate.

The animals got along great, hung together like best friends, and had created an unbreakable bond between Evan and Cinder.

Cinder didn’t acknowledge that bond. Yet.

But he was working on it.

Doug’s ears twitched, then went flat and he whined. His reaction also alerted Cate, and both animals leapt from the sofa to race for the door.

Evan checked his watch. She was more than two hours early. Because the televised sporting event would go late, he’d planned to use it as an excuse to wait up for her.

Doug barked at the door, more fretful than usual.

Before Cinder had a chance to come in, he joined the animals and opened the door for her.

“Hey.” Despite the dark of evening, she wore sunglasses with her requisite nurse’s uniform. Head down, posture tired, she trudged in, her bouncy blond hair a little wind-whipped from the recent storm.

As comfortable in his apartment as she was in her own, she kicked off muddy shoes on the entry mat and, face averted, tugged off her windbreaker.

“You’re off early.” Cinder’s hair wasn’t the only bouncy thing. Evan watched her breasts as she shed the jacket. She had a body that no guy could dismiss. Big breasts, full hips, round thighs…

And thinking that brought his gaze around to his older brother, Brick, and his best friend, Jesse. Wearing small smiles and looks of masculine awareness, the men stared at her.

When Brick noticed Evan glaring at him, he grinned. Like big brothers everywhere, Brick took great pleasure in being annoying, especially when it concerned Cinder.

“Women in uniform are so sexy.”

Jesse nodded. “Cinder in uniform, more so than most.”

“Yeah,” Cinder said, “rubber-soled white shoes and blousy smocks are such a turn-on.”

On her… they were.

Cinder hung her jacket on the coat tree and knelt to the animals.

Still in her sunglasses.

“Hello kiddos,” she said to the animals. Ears still flat, Doug nuzzled her neck and chewed on a curl. He was the funniest dog ever, doing things Evan had never before seen a dog do.

Cinder hugged him. “You learned that from Cate, didn’t you, big boy?” On her other side, the cat crawled up to poke her little pink nose into Cinder’s hair, making her grin. “You’re both so silly.”

Feeling very on edge for reasons he didn’t yet understand, Evan suggested, “Maybe it’s your shampoo.” He took her arm, hauled her upright, and did his own nuzzling. “Mmm. Smells good.”

“Huh.” Because he already knew that, he just shrugged.

She ducked her face more.

Brick sat forward in his own show of suspicion. Making a play off her last name, he asked, “What’s up, Bratt?”

They did. For over a year now, they’d all hung out together during their free time, mostly at Evan’s apartment. They were a group, and that was all well and good.

Except that Evan also wanted to see Cinder alone. On a date. Or better still, in a bed. His or hers, he didn’t care. Hell, the couch would work. Or even the floor.

Pushing those thoughts aside for the moment, Evan said, “Jesse’s right. What are you hiding?”

She stuck her tongue out at Jesse, and he laughed, saying, “Suggestions like that will get you in trouble.”

For them, she didn’t blush, or falter, or care even a little when they dropped sexual innuendos. She took them as jokes, and reacted in kind. “You wish.” She gave her dog another pat. “Did you bums leave any dinner? I’m starved.”

And just like that, she tried to sidle into the kitchen. Still in those ridiculous sunglasses.

Oh, hell no. “Cinder.” Evan gently clasped her arm to draw her around. She reluctantly let him.

Staring at his feet, she muttered, “It is not a big deal.”

Alarm started a slow crawl up his spine. “What isn’t?”

With an exaggerated sigh, a heartbeat of hesitation, she took off the sunglasses.

What she revealed hit him as an emotional sucker-punch to the gut. “Son-of-a-bitch,” he whispered.

“Evan…” she complained at his reaction.

“Shhh.” Her left eye was badly bruised, swollen, her cheekbone cut and abraded. By morning, she’d have one hell of a black eye.

Something hot and lethal settled like lead in his chest.

“It’s nothing,” she insisted, giving them each a quick but fractious glance.

It was something, all right. “What happened?”

“An idiot patient who got out of control, that’s all.”

Evan cupped her chin and lifted her face. Her hair fell back, exposing a cut on her forehead, too. A neat row of tiny stitches marred her fair skin near her hairline.

His stomach clenched and his shoulders stiffened. “Who?”

She rolled her eyes. Or rather, she tried to, but with her left eye so swollen and discolored, she didn’t get much effect. “I don’t remember his name. He was waiting to be seen, but then he flipped out –”

“On everyone really, but yeah, I was… closest at hand.” She wrapped her arms around herself and tried to look impervious. “He was high on something, I guess. He decided it took us too long to get to him and then he sort of… blew, raging on everyone.” She let out a breath and forced a smile that wouldn’t fool anyone. “When the guards showed up, he ran off without doing too much damage.”

“Looks to me like he did plenty of damage.” Evan could barely speak around the commingling emotions of rage, concern, protectiveness…

“Superficial stuff, that’s all.” She patted him – as if to comfort him! “You know how easily I bruise.”

From playing, sure. Not from violence.

Brick lifted her wrist to examine another mark. “He grabbed you?”

“My arm, yes.” She eased away from his hold. “It all happened really fast, but now it’s over, and I’d as soon not talk it into the ground, so let’s move on.”

Everyone ignored that request.

Jesse asked, “Did the police get him?”

“They have the name he used when he signed in at the hospital, and we all saw the snake tattoo on his neck.” She shrugged. “Last I heard, they were still looking.”

“It sort of wrapped around his neck and went down somewhere on his chest.” She cleared her throat. “Very colorful.”

Doug whined, so she began stroking him again.

Brick looked her over. “Did you get hurt anywhere else?”

She glared at him for doubting her. “I’m a nurse, remember? I’d know if I was hurt.” Focusing on Evan again, she said, “Can’t the rest of the inquisition wait? I’m starved, I need caffeine, and I desperately want to change clothes.”

He moved closer to her, speaking softly, drawing her in. “You promise you’re okay?”

She nodded too fast. “Cross my heart.”

Hands on his hips, Jesse searched her face. “You don’t have to be stoic with us, you know.”

That wrought a genuine laugh. “So I should do what? Look pathetic? Maybe shed some tears? That’d make you guys feel better?”

Both Brick and Jesse blanched, saying together, “God, no!”

He watched her shoulders go back, her mouth firm, and he wanted to kiss her. All over. Every place that she might have been hurt, and in all the places that she hadn’t.

“Good. If you did, those two would fall apart.”

Relief took the tension out of her shoulders. “Well, we can’t have that, now can we?” She sniffed the air. “I hope you guys have something good left over from dinner.”

This time when she walked off, Evan let her go. Doug loped along beside her, and Cate followed behind the dog like a feline caboose.

After watching her retreat, Brick whispered, “Despite the bravado, she shouldn’t be alone.”

Evan agreed. “I got it.” He knew Brick and Jesse cared about her, but not in the same way. Everyone understood that – except Cinder.

And maybe it was past time that he explained a few things to her. 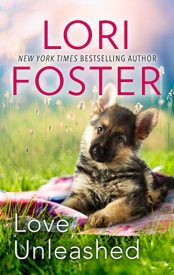