Shelter from the Storm - Lori Foster 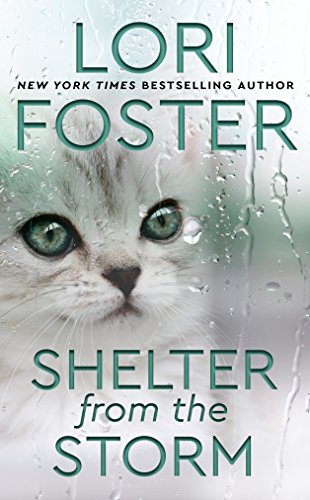 As a teenager Sabrina Downey escaped an abusive situation and found shelter in her neighbor’s home. Not all foster care homes are as welcoming and caring as the Pilar family’s. In her foster-brother Roy, Sabrina found safety and friendship. Years later, their relationship has the potential to deepen into something more meaningful if they’re willing to brave their emotions.

Reviews of Shelter from the Storm 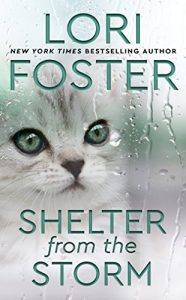 When the storms woke him, his first thought was of Sabrina. As lightning shattered the darkness of midnight and the growl of thunder set everything trembling, Roy Pilar bolted upright. She’d be ashamed but terrified, thanks to a history of violence so sinister it still gnawed on him, making him want to resurrect the dead just so he could exact some personal vengeance.

Throwing back the sheet and climbing to his feet, Roy felt around on the chair for his boxers. Hopping on one foot and then the other, he pulled them on with haste. He was on his way to the front door when the frantic knock sounded.

His guts clenched and his eyes burned. As he hurried to the living room, he called out, “Be right there.” On another series of panicked raps, he opened the door and Sabrina Downey launched into his arms.

Against his naked chest she felt so soft and warm and so damn right.

Heart breaking for her, he cradled her close a moment. “Shh. It’s all right. I’ve got you now.”

“Don’t.” It wasn’t her fault that raging storms always brought out memories too harsh to deal with on her own. Abuse. Death. Displaced in the system.

Roy lifted her into his arms and, after kicking the door shut, went to sit on his couch.

When he started to reach for a light, she tightened around him and whispered, “Please leave it dark.”

So she could hide. But she didn’t need to hide from him. He’d been there that night, and he understood her reaction because he still suffered reactions of his own. She had no reason for shame, none at all. But that was something he could explain to her later. “All right, kiddo. Whatever you want.”

At twenty-five, Sabrina was extremely independent. It was a testament to her spirit and intelligence that she’d accomplished so much, that she acknowledged her past by working with abused children. Only someone special, someone with an innate empathy for victims, could deal so gently with the things she saw on a daily basis.

She lived alone, worked in an emotionally draining field, and when necessary, she fought for the rights of others with fierce intensity. She despised injustice of any kind and opened her heart to one and all.

It was only when Mother Nature raged, breathing life into old nightmares that Sabrina needed to borrow his strength.

Tucked in close to his chest, her fingers digging into his shoulders, Sabrina felt small and frail and very much his.

But she wasn’t, not yet.

She accepted their close friendship. She’d even rented the apartment across from his as soon as it became available. But anything more? He didn’t know how she’d feel about that.

She didn’t know that he’d loved her forever. Even before his parents got guardianship of her, he’d been drawn to the young girl who moved in next door. At first he’d felt protective of her, seeing her loneliness and her sadness, suspecting her abuse. He’d befriended the girl with hair like liquid moonlight, her eyes big and blue and hungry for understanding.

Later, when she’d been only seventeen and he twenty-one, he’d accepted that he felt more.

But for years her circumstances and her age kept him from going down that path. They hindered him still because Sabrina saw him as a friend, or maybe even a pseudo–big brother.

In the dark and quiet of his living room, Roy held her secure and settled back into the corner of his deep couch. Drowning in protective instincts, he pressed a soft kiss to the top of her head and stretched out his long legs, propping his feet on the coffee table.

Her silence worried him, so he asked, “Comfortable?”

She nodded without allowing a single inch of space between them. A loud crack of thunder sent her pressing closer.

He soothed her with easy strokes over her back. As if he hadn’t noticed her violent reaction to the storm, he asked, “Not cold?”

Experience told him that her shivers could be the remembrance of a long-ago night still churning through her.

“No.” He felt her mouth against his chest. Voice small, she asked, “Are you?”

Hardly. Resting his hands on safe ground, one on her waist, the other on her shoulder, Roy said, “I’m good.” At least, as good as a man could be while holding the woman he loved, he in his boxers, she in a short nightgown, in the middle of the dark night—while she clung to him with bone deep terror.

Time ticked by and neither of them moved. Emotion kept his thoughts churning; love for her kept him keenly aware of her bare legs over his, her breath on his skin, the scent of her hair.

Eventually the storm began to fade. Flashes of lightning still illuminated the room with a lazy strobe effect, but the accompanying thunder offered only a distant grumble, barely perceptible. The wind died down so the rain became a simple, almost soothing patter against the patio door.

Sabrina’s breathing was so light that if he didn’t know better he might have thought she’d fallen asleep. It satisfied something deep inside him to know his nearness helped to calm her, that when she needed someone, she came to him.

He wanted much, but settled for brushing another kiss over her forehead. Looking across the room at the clock on the wall, he saw it was nearing 3 a.m. He had a lot to get done at the shelter tomorrow, but for right now, for this moment in time, nothing mattered but Sabrina.

As if she’d read his thoughts, she burrowed her face closer to his neck. “You have to be up in a few hours.”

“Hey.” Roy tipped up her chin. Even in the darkness he could see the paleness of her blue eyes. And her mouth. God, she had the most beautiful, sensual mouth he’d ever seen. “I’m where I want to be.”

She gave a short laugh devoid of humor. “Right.”

With the storm abated, she sat up on his lap. His eyes had adjusted enough that he could see her, the pale yellow gown with little flowers, her naked knees, her cleavage.

Pushing hair from her face she looked around as if she’d never seen his apartment before. Truth was, it was identical to her own across the hall.

Roy just waited to see what she’d do, what she’d say—if she’d acknowledge the growing rise beneath her bottom, a reaction he couldn’t help now that she wasn’t mired in panic.

“I guess every guy enjoys getting woken up in the middle of the night by a clinging, hysterical woman who falls apart over the weather.”

“Maybe not every guy and definitely not every woman.” He opened his hand over her narrow back. “Just you, Sabrina.”

She cast him a quick, uncertain look.

Her face was so sweet and vulnerable and it made him feel ten times more a man. “I understand why you react the way you do. I hate seeing you upset, but I like holding you. A lot.”

As usual, she took his comments all wrong. Giving in to a self-conscious laugh, she said, “Roy Pilar, you have always been the most uniquely kind guy I’ve ever known.” She slipped her arms around his neck and gave him a hug of gratitude. “Thank you.”

When she started to lean away, he held on. “You’re okay now, Sabrina?”

Close to his mouth, she smiled and whispered, “Yes, thanks to you.”

So tempting. But not yet. “You want to talk about it?”

“God no.” She squeezed him again, then forced space between them. “I should get back to my place.”

“Why the rush?” He fingered a hank of silky hair draped over her shoulder. Naturally curly and very pale, her hair had always fascinated him. “We both need to be up in a few more hours. And there’s no guarantee the storm won’t return.”

With that, her expressive face stilled with worry. “I hate this, you know?”

“When you’re alone. I know.” And he was so glad that she’d moved close to him. The idea of her going to any other person, any other man, would be unbearable. “If you hadn’t come to me, I would have been knocking on your door.”

“No thanks necessary.” He scooped his arms around her and came to his feet with her held against his chest. She was so petite, so damn female, that his every nerve ending sparked with awareness. “I’m glad you live right next door so that I can be here when you need me.”

“To my bedroom.” He maneuvered through the darkness, around tables and a chair.

She went still and alert. “What?” 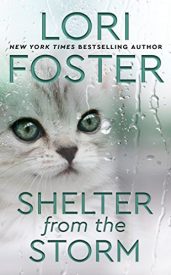