When a lighthearted contest takes a dangerous turn, millionaire real estate mogul Brent Bramwell will do anything to protect a sexy, quirky shop owner in this fan favorite from Lori:

Shadow Callahan is enlisting sexy men to participate in a contest designed to drive traffic to her shop, Sex Appeal. So when the gorgeous, buttoned-up Brent Bramwell falls into her life—literally—she’s delighted to recruit him for the cause. His attraction to her is a definite bonus, but is there room for her in Brent’s orderly, high-society lifestyle?

Brent knows life with Shadow means a walk on the wild side, but once he’s had a taste of her, he can’t get enough. Too bad he’s not the only one who wants her. When a stranger’s gifts escalate from romantic to frighteningly personal, can Brent regain enough control to keep Shadow safe?

YOU’VE BEEN A BAD BOY. Go to my room.

Those particular words, boldly printed on a soft, white cotton sweatshirt and drawn tight across a rounded female chest, caught Brent Bramwell’s eye. He’d been perusing the new strip of eclectic shops, seeing that everything was in order now that most of the spaces had been leased, when he’d caught the flash of movement in a display window.

Curiosity got the better of him, and despite the icy chill of the early November wind, he slowed his gait. All he could see of the body in the sweatshirt was the middle. Involved in hanging new blinds, the woman stood on a stool or step- ladder, her face hidden from view by the sagging blinds. The windowsill concealed her legs from her thighs down.

But what he saw in between—now that was enticing. Curvy hips, slim thighs, luscious breasts.

He approached slowly, ignoring the lash of frozen snow pelting his cheeks and tossing his hair. He read the words on the sweatshirt again and wondered what type of female would advertise such a suggestion. Close to the window now, only a few feet away, he stopped to stare as she stretched upward. The sweatshirt rose to give him a view of the smooth, pale skin of her midriff. He even glimpsed her navel, a shallow dent in a very cute belly.

He caught his breath and in that instant she stepped down, looking directly at him. Her huge light-brown eyes, heavily lashed and faintly curious, sparkled with humor.

Literally. His feet slid out from under him on the icy walk and Brent found himself flat on his back staring at the gray, blustery sky, the wind temporarily knocked from his lungs.

He was still struggling to breathe when he heard the shop door open. The woman rushed outside, the cold air ruffling her dark curly hair, then she, too, did a slip-slide act as she attempted to maneuver on the ice. Doing a better job than Brent, she caught her balance and knelt beside him. As she reached for his head and cradled it between her warm palms, he stared at her—stared into the prettiest brown eyes he’d ever seen. They were deep and compelling.

Her voice anxious, her cheeks flushed, she asked, “Are you okay?”

Brent searched for something to say, but came up blank. He simply nodded, not sure he could speak. Embarrassment warred with discomfort. The sidewalk was hard, scattered with bits of salt and ice, and so cold his teeth began to chatter.

She frowned. “Let me help you up. Can you walk?”

He started to respond with a disgruntled “yes,” then thought better of it. She was cute, not shy in the least, and he was interested. “I think so,” he answered, then waited to see what she would do.

Without hesitation she slipped one arm beneath his shoulders and attempted to help lift him. Brent was a big man. Another man would have had a hard time supporting him, but she tried, he’d give her that. He felt her slim arms go around his waist, felt her shoulder wedge into his armpit as she pulled his arm over her shoulders. Her softly curved hips pressed into his thigh. Once they both stood, he towered over her.

Together, slipping around a bit, they started forward. He gave her only a little of his weight, just enough to keep her glued to his side. She led him into her shop. “I’m really sorry about that. They’ve been throwing salt down all afternoon, but with these temperatures, the ground just keeps freezing.” She peeked up at him, mesmerizing him with those big brown eyes. “I hope you didn’t hurt anything.”

She was, without a doubt, adorable. Her dark, curly hair was cut in a tousled style and looked as fine as silk. Her cheeks were now very pink from the cold, but otherwise she was pale, her skin flawless. Brent leisurely looked her over as she led him to a seat behind the checkout counter.

She had on very snug, faded jeans and white leather sneakers. The sweatshirt was softened by age, adapting to her body, to her breasts. Now that he was sitting down he could examine her more thoroughly. He didn’t miss the fact that her nipples were puckered from the cold.

“I’m fine,” he told her as she peered at him anxiously. “I believe I only bruised my pride.”

Her wide grin took his breath again. “Oh, I don’t know. I imagine you may have a few other bruises as well if you take the time to look closely.”

Surprised by her brazenness, Brent said, “It’s possible, I suppose.” Then he asked, “Who are you?”

Thrusting out her small hand, she said, “Shadow Callahan. Proprietor.”

Brent took her hand and continued to hold it, noticing how small and delicate it was. And warm, despite the cold. “Shadow? That’s an unusual name.”

“Yes, well, most everyone tells me I’m an unusual person.”

Shadow glanced down at their clasped hands. Her grin widened. “Isn’t this a rather long handshake? According to an article I recently read, when a man retains his grasp on your hand for more than three seconds it’s an unqualified come-on.” Her eyes twinkled at him. “Are you perchance coming on to me?”

Brent was totally taken aback. He released her hand, but he did so slowly, refusing to let her see his surprise. He said deliberately, “I believe I was contemplating exactly how ‘bad’ I would have to be to get sent to your room.” 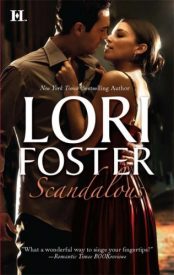