For the Love of Wendy - Lori Foster 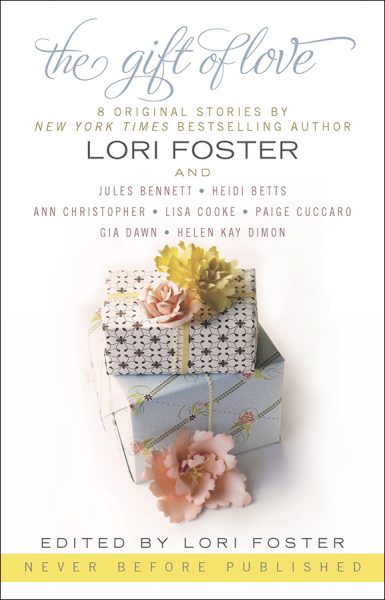 For the Love of Wendy is featured in the anthology The Gift of Love and is not available on its own.

The story of Jack and Wendy.

The Gift of Love is one of Lori’s benefit books. The authors are donating all of their proceeds to The Conductive Learning Center of Greater Cincinnati, a charitable organization.

Reviews of For the Love of Wendy 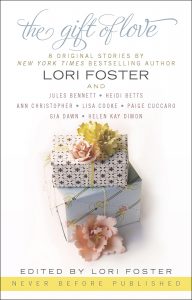 Standing at the dining room window, hands stuffed in the pockets of his dress pants, his tie hanging loose over a partially-opened dress shirt, Jack Burke watched his five year old daughter in the back yard. Her movements were methodical and involved as she studied a yellow flower.

Sometimes the emotions overwhelmed him until he felt his eyes burn, until his throat tried to close with unending regrets, savage rage, and despair.

Though it had been five years, there were days that he felt the loss of his wife, Melanie, as the sharpest blows, as if it had just happened, as if the doctors were once again pushing him out of the way in a race to try to save her – and then later, presenting him with his premature child.

A little girl Melanie would have loved with all her heart and soul – if she had lived. The emotional turmoil of losing a wife and gaining the responsibility of a precious, tiny child was enough to flatten him.

His baby girl had survived physically intact, but still not whole.

His heart didn’t give a damn; he couldn’t possibly love her more. To him, she was perfection in every way.

To the rest of the world, she was a child who had suffered trauma while still in the womb, and as a result, her intellectual maturity would never match that of her peers.

At birth, Wendy had weighed less than four pounds, and still she’d snuggled into Jack and seemed comforted by him. So little, so helpless – all he had left of Melanie.

He would raze the earth for her.

But what she really needed, what he knew would be best for Wendy, was a fulltime mother. God knew he tried to give her everything, but he wasn’t obtuse. Children needed the influence of both a man and a woman, the balance of nature, the gift of united love.

It was past time.

With an effort, he switched his gaze from Wendy to Briana. For two years now he’d known Bri, and he’d watched her care for his daughter, grow to love her. Briana treated Wendy as her own, and that’s what mattered.

At twenty-three, Briana was only nine years his junior, and she was so smart that carrying on conversation was easy. But in many ways, physical ways, she still reminded him of a teenager. Rangy in build, doe-eyed and too sweet, she gave the appearance of youth, yet she had the soul and compassion, the calm temperament and concrete sense of responsibility, of a woman.

He saw Briana as a gifted academic, a cute brainiac who effortlessly juggled college with working part time as Wendy’s caregiver. She was rarely sick, and he’d never heard her really complain. She showed a contagious enthusiasm for life and an intellectual understanding of people that sometimes left him amazed.

Sweat from the overly warm June day left the pixie cut of Briana’s short, dark hair a little glossy. Short, curled tendrils clung to her forehead, her temples and nape. As often happened, her glasses had slipped down the bridge of her nose, forcing her to tip her head back to see through them. Her gaze was serene and happy as she handed another flower to Wendy. Jack knew they were working on colors again, given all the yellow items laid out on the blanket.

Briana was so damn good with Wendy, so enduring and smart. And best of all, she made learning fun. She knew how to engage Wendy when so many others didn’t. Her positive influences were invaluable.

He and Wendy were lucky to have her. But as his mom had just pointed out during his routine visit with her, it wasn’t enough. Wendy would benefit from having Briana around more. And he needed to get on with his life by looking to the future, instead of the past.

As painful as it’d be, it was time to create a new family.

Determined, Jack slid open the door, took a step out to the patio, and waited.

Wendy looked up when Briana prompted her, and then she scurried to her feet and in that silent, stilted way of hers, she ran to him.

Scooping her up, Jack held her close to his heart as he so often did, and he thanked God that even though Melanie hadn’t survived the awful collision, his baby had. Learning disabilities aside, she’d made it when the doctors had feared she might not.

He would always be eternally grateful.

Breathing in her sweet, little girl scent, Jack kissed her sun-warmed cheek. “I love you,” he told her.

Even at five, there were few things Wendy said; sharing her love of him was one.

Calling out to Briana was another.

Jack felt Briana watching him, something she did a lot, as if curious about something, as if she looked at him in a more intimate manner than he viewed her.

Or at least, how he used to view her.

Now he looked at her and he took in the charm of her big blue eyes behind wire-framed glasses, the wisdom in her demeanor, the lack of sophistication in her simple clothes of jeans and a college log T-shirt. She’d kicked off her sneakers and he saw that her feet were small, narrow.

Jack felt a moment of guilt, then solid resolve. 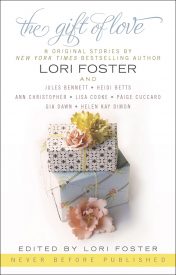